The Diva League Are Not The Good Kind Of Blacks 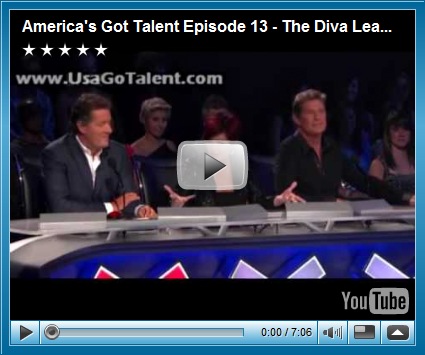 The Diva League which consists of Black transwomen performed a dance and lip-syncing routine to Rihanna's song Disturbia, on America’s Got Talent.  Those of you who are aware of my reality addiction, know that I make no excuses for the often problematic commentary or constructions that can routinely be found in reality television, however the commentary by Piers Morgan crosses a line that demands to be discussed.

There's no easy way of putting this. We are trying to find an act that can represent America on the world stage, and from where I sit a bunch of lip syncing old drag queens who can't dance is not...not what America needs right now. Not exactly Barack Obama, is it?"

First off, what America needs to do is get over this idea that someone else’s gender is problematic.  If it ain’t your body then it ain’t your business, plain and simple.  The trans community has to put up with enough shit to get through life without being publicly shamed on national television by a British agony bag.

Piers is a cisgender man and therefore he will never have to deal with the transphobia that we openly display.  Some might wish to look at his commentary as simple mindless drivel, however it is language like this that puts lives in danger because it devalues who they are as human beings.   When the majority of those on the remembering our dead list are transwomen of color, the cool way in which he delivered his criticism leads one to believe that there is a disconnection between the ways in which language can and does lead to violence.

I am further horrified that he chose to point out that there is a difference between the women of Diva League (note: I use the term women because in the video a female pronoun was used) and Barack Obama.  White men like Piers have always tried to push the notion that there is an acceptable way in which to be Black.   You see, what they would like is for us to all perform Blackness in a way that is non threatening to White hegemony.

Barack Obama is a centrist and therefore he has been unwilling to speak truth to power.   With the exception of his commentary on the Gates affair, which he quickly withdrew, Barack has calmly assured White people that their fears of retribution are without merit.  Barack does not speak to Whiteness about the crimes that they have committed, and instead prefers to traffic in the language of unity as though Whiteness has even begun to own its undeserved privilege or make way for people of color.

The Diva League does not have to be Barack Obama because there are many ways of being Black.  Just as we appear in different hues, so to are we transgendered, cisgendered, same gender loving, straight, old, young, differently abled,  able bodied, female and male.   What is beautiful about Blackness is its diversity and despite a desire on the part of men like Piers for a homogenous performance, we continue to be a rainbow of expression, thought, behaviour and language.  I doubt that he understood the various ways in which he was displaying his privilege because White men like Piers have never had to give thought to how their actions effect others; the world has been designed to privilege their wants and needs.

I do believe that the last word should go to the women of Diva League.