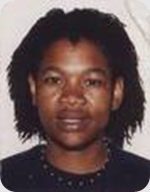 Eudy Simelane was an athlete and a lesbian. In a perfect world that validated love in all of its forms, her sexuality would be a non-issue. In South Africa, however, identifying as a lesbian (or being accused of lesbianism) all too often leads to a violent death, despite a constitution that protects the rights of its GLBT citizens. Simelane was known as a top striker and she became the captain of the nation’s soccer team. Her position would normally have placed her in high esteem.

Instead of being her country’s sports hero, however, Eudy Simelane now lays buried beneath the soil: she was brutally gang-raped and stabbed exactly twenty-five times before dying. For Eudy, the issue was not just that she was a lesbian but that her appearance and gender expression were commonly understood to be butch.

According to the Times Online, at least twenty South African women have been killed in what are known as “corrective rapes” in the last five years. Lesbianism is considered to be unnatural and therefore women are systemically raped to convince them that their “true” orientation is heterosexual. This phenomenon reflects multiple forms of oppression for lesbians, bisexuals and queers who are victimized through these “corrective rapes.”

Editors Note: Until I can find a fix all links must be clicked on from the front page.  Sorry about the inconvenience