Many years ago, I learned that certain clothing i.e anything white and children are a very bad idea.  I have yet to make it through the day without them touching me with something sticky and weird.  If there is mess, one can be certain that my boys will find it.  I have a hard enough time keeping them out of my dreadlocks, without tempting fate with white jeans.

Now that I am at home with them, my style has relaxed quite a bit.  I spend most days in shorts and a t-shirt because it is comfortable and suits my lifestyle.  I recently ordered a summer skirt from e-bay.  I love long flowing skirts but have not actually bought one in a long time.  Each time they see me wearing it, their eyes get as big as saucers and they are both quick to tell me how pretty I look. The baby in particular loves it when I wear anything pink.

Though we have tried to raise the boys in a gender neutral manner, they have still internalized many ideas about what it means to be male or female.  This can materialize in their chants of penis power, or telling me how much they love it when I wear “girl clothes”.  We have tried to impart the idea that there is nothing inherently female about a beautiful blouse or a skirt but it’s not like the unhusband is going to put one on to reiterate the point.

Clothing often marks gender, even when the behaviour of the individual in question is neutral.  Think about the fact that newborn baby girls are placed in 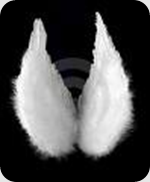 pink and boys in blue.  When Destruction was a baby,  we had professional photos done and I wanted a picture with him in angel wings. The photographer informed me that the wings were for girls and that I should pick something else. Why would any mother think that a male child was not an angel?  I further find it ironic because the angels in the bible are masculine and yet we have feminized the term in our common everyday discourse.

As we parent, even in the most aware households, we actively teach gender.  For my boys, pink and long flowing skirts represent femininity.  As their mother and female role model, it is comforting to them, to see me perform womanhood as they have seen in the media and their interactions with the outside world.

No matter how we try to disturb gender roles in our home, they have been indoctrinated like everyone else.  I have come to understand that one cannot completely erase the concept of gender because we all perform it in various ways.  Perhaps, what is more important is thinking critically about the limitations we impose because of our understanding of gender. Realizing that though we are trained to believe that some acts are inherently female may not necessarily be bad as long as we understand that these are equally important to that which we consider inherently male.  This does to some degree mean embracing an essentialist view of gender, however; I am not sure at this point, that there is any other way to negotiate it differently for young children.

How have you disturbed gender models in your home and what issues have you faced?  When it comes to gender, what are the most important lessons that you seek to impart?