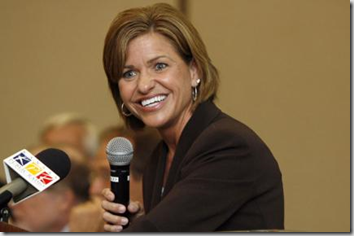 I should really start a blog entitled dispatches from post racial America.  POC are routinely told that we have come so far and that things are getting better each day.  Racism is often theorized not to effect our lives to a great degree.  Of course these are the pronouncements from Whiteness and their house slave henchmen.

Jenkins told people at the Hiawatha forum the nation could benefit from inspired leadership of a group of "really sharp" young Republicans in the House, particularly Rep. Eric Cantor, R-Va. Cantor was mentioned as a possible GOP vice presidential candidate in 2008 and is thought to be interested in seeking the Republican nomination for president in 2012.

"Republicans are struggling right now to find the great white hope," Jenkins said to the crowd. "I suggest to any of you who are concerned about that, who are Republican, there are some great young Republican minds in Washington."

Of course, she simply misspoke and did not intend to infer that Whiteness desperately needs to return to power.  She meant a shining light.  Isn’t that sweet everyone.  Perhaps we should all ignore that the term originates from a desperate plea that Jack Johnson, the first African American heavyweight champion be defeated.   It is a signal that Whiteness is meant to dominate and control every sphere of life.

We know that the Republican party  represents Whiteness, under the guise of fiscal responsibility, and family values, however; since the election of Obama, they have increased their rhetoric to appeal to those that feel that they have been supplanted.  Whiteness is a tool used to blind the disenfranchised to the ways in which they are oppressed by the ruling elite.  Having Whiteness as a default position allows them to oppress bodies of color while ignoring the ways in which capitalism and various other systems work, to ensure that little to no positive gains are made.  It is not accidental that we can trace generation of generation of families that are dependent upon welfare  and those lacking the ability to achieve upward mobility despite a lifetime in the workforce.

It is a common tactic of the ruling elite to blame POC for the disparity in wealth and value, even though we socially exist with the least power.  Women like Lynn Jenkins, represent the lie that if Whiteness were in power, that suffering would decrease.  Until president Obama became commander in chief, every single president was White and therefore, all of the economic (think the Great Depression and inflation in the seventies) and social issues, that previously occurred, were under the headship of Whiteness, furthermore; though a Black president may be a small indication of change, it is worth noting that most positions of authority are still presided over by Whiteness.

Jenkins may back track after the fact, however; since her examples of people fit for leadership where White, her intent is quite clear.  Republicans have a  habit of saying obviously racist commentary, only to offer a weak apology when taken to task about their statements.  The regret is false because the intent was to be racist in the first place.

POC are often accused of playing the “race card,” when we speak critically about Whiteness and yet it is Whiteness, that continually overvalues itself and seeks to ensure that race is constantly spoken about on its terms.   Controlling the conversation is just one of the many ways in which Whiteness manifests its powers.  Through discourse it reifies difference and makes real the illusion that Whiteness is not only to be privileged but is privilege.  Whiteness is the power to act systemically to benefit those that are understood as White and oppress bodies of color and therefore the great White hope that Lynn Jenkins hopes for is omnipresent in every aspect of social organization to one who is willing to understand the way that we have structured our agents of socialization.