The Lion of the Senate Sleeps: Rest in peace Senator Kennedy 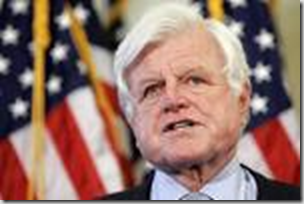 After forty-seven years of serving his country as a senator from Massachusetts, Senator Edward Kennedy lost his courageous battle with brain cancer. He was referred to as the lion of the senate and the last torch bearer of the long defunct Camelot dream. Kennedy will be remembered as much for what he accomplished, as for the ghosts of two brothers, tragically lost to violence, which seemed to haunt him all of the days of his life.

The Kennedys have always had an aura of destiny surrounding them and though they never hesitated to grasp the mantle of responsibility; it has come at a cost of much sadness and death. The last of Rose and Joseph’s nine children, Edward himself nearly succumbed to the curse earlier in his life, during a plane crash, which was to leave him with back issues for the rest of his life. After the passing of John and Robert, he became their last great hope and it was with baited breathe, that many awaited the election of another Kennedy to the White House.

He challenged then President Jimmy Carter, for the position of commander in chief in 1980, and very narrowly lost during a very heated primary season. The ghost of Chappaquiddick hung heavy in the air and he struggled to explain how it was, that he could leave the scene of an accident, with a young girl dead in his car. Even in his defeat, Kennedy knew triumph, as he continued on at the convention to deliver the speech of his life. Though it was meant to be an endorsement of then President Jimmy Carter, he spoke of hope and revitalization.

"These are not simplistic pledges. Simply put, they are the heart of our tradition, and they have been the soul of our party across the generations. It is the glory and the greatness of our tradition to speak for those who have no voice, to remember those who are forgotten, to respond to the frustrations and fulfill the aspirations of all Americans seeking a better life in a better land. “

Realizing that Camelot would not be revisited in his lifetime, Kennedy determined that his legacy would be in the senate. To conservatives, he came to represent everything that was wrong with liberalism. He was often depicted with a bulbous nose and as a drunkard. Never dismayed by his critics, he continued to work feverishly for the good. He was unafraid to seek compromise and even worked with President George W. Bush on the no child left behind policy. He also partnered with Senator John McCain on immigration. Kennedy understood that compromise was essential for progress.

No sphere of politics escaped his attention. He fought to impose sanctions against South Africa due to apartheid. He sought peace in Northern Ireland, denounced the Vietnam War and was instrumental in a ban on arms sales to Chile. His cause was peace, not only for the United States but for the world.

Even in his later days, he did not fail to recognize the cusp of possibility, when he sidestepped Hillary Clinton to endorse Barack Obama, who would become the nation’s first African American president. “My fellow Democrats, my fellow Americans, it is so wonderful to be here, and nothing is going to keep me away from this special gathering tonight,” Mr. Kennedy said. “I have come here tonight to stand with you to change America, to restore its future, to rise to our best ideals and to elect Barack Obama president of the United States. The hope rises again” he stated, “and the dream lives on.”

Illness kept Edward Kennedy away from his beloved senate but his influence was deeply felt as the battle is being fought for healthcare. For Kennedy, this was an issue to which he deeply committed. Kennedy referred to healthcare reform, “as the battle of my life”. As the tensions rise, his voice and influence will be sorely missed.

Though Edward Kennedy was a patriarch, father, uncle, husband and grandfather, he not a perfect man. He was haunted by ghosts and twice used his privilege in terrible ways, however; he fought for those whose voices we have long since silenced, in a bid to make might right. He taught the world that privilege can be used for good and that service should be a calling for us all.

In December, he spoke of his legacy during a ceremony in which Harvard granted him an honorary degree:

“We know the future will outlast all of us, but I believe that all of us will live on in the future we make,” he said. “I have lived a blessed time.”

As Edward Kennedy awaits his rest next to his much beloved brother John Fitzgerald Kennedy, he shall be eulogized as the man that heard the call to battle and answered with the swiftness of cheetah and the passion of a lion.