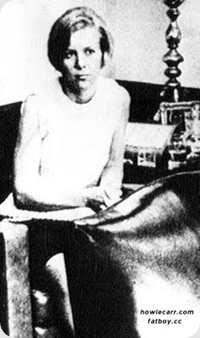 Sorry my dear liberal brothers and sisters, I respectfully sit this one out. Women first.

Further, as an alcoholic, I will not mourn a rich drunk allowed to make a deadly mistake and carry on as if nothing had happened.

I will mourn the working woman who was forgotten, as the actual circumstances of her death were covered up by a powerful family, who then arbitrarily assigned her slut status.

Imagine slowly, slowly drowning, water enveloping you inch by inch as you drown, waiting for the person to rescue you that never arrives.

Sorry, folks. Some things, I do not excuse.

Mary Jo represents all the nobody-women killed (or allowed to die, if you want to quibble over my terms) by all the powerful, rich men, because they were "evidence"--because they got in the way.

FUCK Ted Kennedy. Purgatory is hot, and he'll be there awhile.
~*~
EDIT (for the person who thinks I "exaggerate")-- Please see above Wikipedia entry, specifically THIS QUOTE (italics mine):

Earlier that morning, two amateur fishermen had seen the overturned car in the water and notified the inhabitants of the nearest cottage to the pond, who called the authorities at around 8:20 am.[14] A diver was sent down and discovered Kopechne's body at around 8:45 am.[15] The diver, John Farrar, later testified at the inquest that Kopechne's body was pressed up in the car in the spot where an air bubble would have formed. He interpreted this to mean that Kopechne had survived for a while after the initial accident in the air bubble, and concluded that

“Had I received a call within five to ten minutes of the accident occurring, and was able, as I was the following morning, to be at the victim's side within twenty-five minutes of receiving the call, in such event there is a strong possibility that she would have been alive on removal from the submerged car."[8]

INCH BY INCH she died. And imagine how horrible, the terror. It probably took several hours, according to all I have read, since the accident happened sometime after MIDNIGHT. Think about it, MIDNIGHT. No phone call to any cops or EMTs, since he was DRUNK and had to SOBER HIS ASS UP FIRST.
I repeat, with considerable emphasis: FUCK TED KENNEDY.