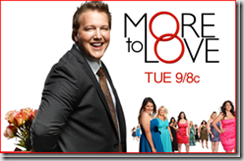 Hi everyone!  I’m here to regale Renee’s awesome readers with tales of this summer’s surprise hit, the FOX reality-dating series More to Love.  Each week, I’ll be posting about my reaction to the episodes, as well as giving everyone a chance to get their own love on (or snark) in the comments section.

If you read Renee’s fantastic recap for the first episode, you already know that only 15 women this week remain to compete for the heart of Luke Conley, a 26-year old, 330-pound real estate developer looking for love, specifically from one of the remaining plus-sized ladies basking in his company.  In this episode, Luke arranges for two “group dates”: one takes place on a cruise ship (Team Malissa), while the second rendezvous (Team Anna) is pool-side.  Christina, who is not selected by either team, has an exclusive private date as her and Luke jet-set for a night in Las Vegas.

In the future, I believe host Emme ought to start the episode off with some mustered-up enthusiasm, something like, “Ladies, welcome to another exciting week of dating California’s most boring bachelor!”  Seriously, the man has all the personality of milquetoast.  Even as the fifteen remaining women gush over how “adventurous” Luke appears, I keep wondering, where exactly is his spirit of adventure hiding?  It sure as hell isn’t going to be found lurking around any cruise-ship lounge…

Nevertheless, Team Malissa heads over for an evening cruise aboard the cheesily-named Dream Maker.  All of the women are “dressed to impress” with over-the-top evening gowns.  The wardrobe department must be having a ball with this series – who wears a full-length gown on a second date?  Most of the conversation for this date is dull, but I kept hoping that someone might mutiny, if only for the sheer entertainment of pirate-talk.

In the meantime, poor Heather gets seasick and hurls overboard before she can finish her second champagne flute.  After being fawned over by the rest of the group top-side, Luke ventures downstairs to make sure Heather is feeling better.  Her chipper attitude, despite the evening’s bad turn, makes a decidedly positive impression on him.  I, for one, was less impressed when Heather cried, “How are you supposed to love somebody if you can’t even see him?”  Heather, how are you supposed to love someone if you barely even know him?

Christina, the solo date, seems determined to pique Luke’s, err, interest.  Her philosophy on dating essentially boils down to: why bother with getting to know the other person when you could be making-out with him instead?  She makes no secret of the fact that the other girls don’t like or “understand” her.  She reminds me of a certain kind of girl you might meet in college (you know, the one who wears full make-up and three-inch heels for brunch in the campus dining hall, while referring to herself as “princess” with a straight face), yet it’s clear that she’s not on the show to make friends.  Much like Lauren, another of the show’s more catty contestants, Christina hopes that her sexual charms will entice Luke into picking her for another round of love, or something like it.

This leads into the next group date with Team Anna.  Contestants in this group are less than pleased that Luke chose a swimming pool for their second date.  Now, I can’t speak for everyone, but I think it’s the rare individual who would be thrilled to parade around in a bathing suit with a fairly new romantic interest.  Even as Luke proudly removes his shirt and belly-flops from the diving board, the overwhelming majority of the women in this episode express great dissatisfaction with their weight and swimsuit sizes, despite the fact that Luke isn’t exactly sporting a trim figure, either. (His motto: “Why have a six-pack when you can have the whole keg?”).

“You can’t hide anything,” one woman complains.  “I try to cover up my flaws on the first few dates, not expose them.”  Another tells the camera that she is “not comfortable with this.”  Gee, Luke, since you’re supposedly Mr. Sensitive, think maybe you accept the women’s discomfort and adjust your plans accordingly?  Nope!  Instead, he plies the women with alcoholic drinks from the blender with plainly furtive hopes that, like their first date, some booze will calm their body-image anxieties (read: or help him get to first-base with a few more ladies).

Some of this episode’s contestants stand out as more sympathetic than others.  Kristian, a 26-year old substitute teacher from New Jersey, is clearly smitten with Luke: she leaves love notes for him while he’s away on the Team Anna date and tells him, over and over again, how much she is “falling” for him.  While her feelings may be sincere (and really, who could resist her warm smile or beautiful brown eyes?), she’s one of those women who strikes me as having little experience in real-life dating.  Hold your cards a little closer to your chest, Kristian, or you’re never going to get out of the friends zone!

Another contestant, Melissa (not to be confused with Malissa), is the 21-year old plus-sized model with no dating experience prior to the show.  She seemingly breaks down in tears every time she addresses the camera, but Luke tries to show some compassion by pulling her aside first during his alone-time with each member of Team Anna.  She seems to have been the butt of many cruel jokes about her body and possesses almost no confidence with the opposite sex as she worries that no man would want to be seen in public with her.  I fear that Melissa may have a lot more self-esteem repairing to do before she can really make a good match for any partner.

Lauren has cemented herself as the Resident Hater.  She sidles up to Luke and offers to dish on the women who shouldn’t stay.  Bonnie, the tattooed-and-pierced contestant hailing from Portland, OR, tones down her snark in this episode, yet she continues to claim, “I may look tough on the outside, but I’m a 1950’s housewife on the inside.”  That quote made me more nauseous than watching Heather puke on the cruise ship.  Keep it up, Bonnie, and you won’t be allowed back into Portland anytime soon!

Sadly, not all of the ladies will be able to keep their diamond rings tonight.  Though there isn’t much suspense as to who goes home: Magali and Vanessa, both of whom had almost no camera time on this episode.  Luke also follows the catty Lauren’s advice and ditches Arriane, 37, because she has no interest in having children.  Though she sheds a few tears over being rejected on national television, she maintains that a man out there will eventually love her for her.  “I shouldn’t have to change what I look like to find him,” she says.  Right on, Arriane, and kudos to you for not crying because you’ve supposedly lost the love of your life.

Next week, the ladies are off to the prom!  Let’s see which one of the remaining twelve contestants ends up running to a hotel suite with Luke, and which end up dancing on top of the chairs.