This is a guest post by everyone’s favourite Gus, Allison McCarthy.

Hi, everyone.  I know some folks on Twitter were wondering what happened to my recap of episode 3.  Well, as it turns out, I had to finish a 12-page paper for a course on Technical Writing.  I skipped the first half of episode 3 so that I could finish my second draft.  I meant to do the write-up, but then I was editing and working on graphs.  Then I turned in the final draft on Sunday and got an A- in the course.  I hope no one’s too broken up by my absence, but now I’m back and fueled with two weeks of burning desire for More to Love. 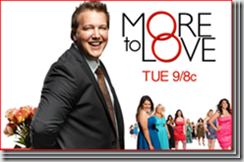 Now, normally I don’t anticipate the drama starting until at least 10-15 minutes into the episode.  But this week, the producers wanted to get an early crack at misogyny: at the episode’s opening, the group gets together to vote on “wife credentials.”

That’s right: each contestant’s personality – chiefly, their confidence, life experience and future potential to not kill Luke in his sleep –  are evaluated and judged as either “Good Wife” or “Bad Wife” material.  Because, you know, every woman’s most cherished and anticipated title is Wife.  If only we’d all banded together and created a formalized critique sooner!  I do get that they’re all competing with the eventual goal of keeping their prized diamond rings at the end and ultimately “winning” the show by accepting their beloved bachelor’s proposal to be Mrs. Luke Conley.  But come on.  Wife potential?  And when is there going to be a vote on Luke’s “Good Husband/Bad Husband” potential, anyway?  Something tells me that if the roles were reversed -- a group of plus-sized men were competing for the heart of a plus-sized woman – male contestants probably wouldn’t be subjected to a “Good Husband” or “Bad Husband” vote.

Mel B, the group’s youngest and self-proclaimed “heaviest” member, gets just one vote for “Good Wife,” since the rest of the group claims she’s too inexperienced to make a good life partner to their precious Luke.  Now, on any other show, Mel might have the advantages of youth and naïveté (she’s never had a date, let alone a boyfriend, so Luke stands in as her benchmark for these experiences) working for her.  But I found it particularly interesting, if not surprising, that Mel B. continued to call attention to her weight throughout the episode, as if her size detracted from the possibility of “winning” Luke’s interest.  The theme of this show isn’t for contestants to lose weight in order to get their man, but all of the women, whether at one point or several, express deep-seated shame over their appearances.

It’s clear that Mel’s confidence with men is minimal at best – at a Moroccan restaurant, she expresses shock and dismay when two dancers approach their table and seductively beckon the couple with scarves for a lesson in belly dancing.  By the end of the date, Mel has started to open up to Luke and she comes across as a flushed, nervous young woman hoping to make a good impression.  Their good-bye kiss is brief and chaste.  Her youth and innocence in romance are certainly charming, but Luke clearly sees that she won’t be hopping into the hot tub for a make-out session anytime soon.  And since that’s the point of the show for this cad-on-the-make, I probably won’t be spoiling it too much by saying that poor Mel doesn’t make the episode’s final cut into the next round.

On the second solo date with Heather, the producers leave an array of formal evening dresses for her to choose from, each looking as if they’ve been selected from the plus-sized remainder racks of last summer’s prom season.   Still, Heather gushes at Luke’s supposed thoughtful gesture.  Umm, I’m pretty sure Luke’s not the one who’s ordering ball gowns for you, but go ahead and give him the credit.  His stunning personality sure isn’t going to be the element that wins her over.  This segues into a sentimental evening spent in a castle (yes, a castle), complete with kissing on the terrace and a moonlit dinner for two.

Luke pries into Heather’s motivations and asks her plans for future work.  When Heather reveals that she hasn’t thought about having children, Luke pranks her by claiming he has three children.  Heather swallows hard and looks frantically around the set.  But good old Luke’s only kidding.  This might be funny if it were coming from any other person.  Only, Heather wasn’t kidding when she said she hadn’t done much in the way of future family planning.  Luke insists that his mother was around during his formative years and that his future wife should take that into consideration.  Talks about moving fast – these two have only had two private conversations and it’s their second date without the group.  Way to keep the mood light and easy, Luke!  Does the third date involve writing your wedding vows?

The group date at the spa is mostly uneventful.  One of the women jumps into the hot tub.  Lauren expresses jealousy over Luke’s diverted attention during their alone time.  Later, she tells him that she will be “more competitive than the other girls” in getting his time.  Except she’s voted off at the end, along with Mel B, then pouts that none of the other women are “as right for Luke” as she is.  She tells the camera that she’ll be laughing outside the gate at whoever Luke’s final choice turns out to be.  Her determination to keep the show competitive until the bitter end leaves me doubting that Luke is worth such adamant declarations of loyalty.  After all, she’s living with the other women day in and day out, while Luke only flutters in long enough to have some cocktails and flirt his way into kissing the group.

Next week, the sexual stakes are raised.  Previews indicate high tension and jealousies within the group.  I’m bracing myself for the nausea of Luke’s anted-up sexual prowess.  If he calls any of these adult women “girls” one more time, I just might throw the remote out the window.