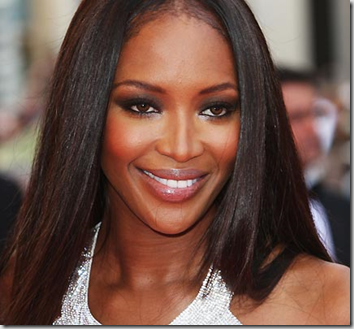 Last year Italian vogue issued a special edition in which only WOC models were used.  This was hailed as a wonderful move for the fashion industry, which has been reticent to move away from all White models.  At the time, I felt that this was much like Black history month; in that special editions, or events only serve to point out the lack of full inclusion on a daily basis, while doing little to bridge the gap or fully challenge White hegemony.

It was said at the time, that by exposing more advertisers and consumers to a various array of beauty, that they would come to an understanding that beauty comes in different forms.  Well it seems that my predictions about Italian Vogue translating into more inclusion for WOC were quite correct. Naomi Campbell is quoted in the telegraph as stating:

“This year, we have gone back all the way that we had advanced," she says. "I don't see any black woman, or of any other race, in big advertising campaigns.”

Campbell, who was born in London to a mother of Caribbean descent, refers to the publication last year of a special edition of Italian Vogue dedicated to non-white models.

"That made some noise, but, unfortunately, we are the same as before," she says. "People, in the panic of the recession, don't dare to put a girl of colour in their campaign, full stop. Nor of any other race. It's a shame. It's very sad."

"You know, the American president may be black, but, as a black woman, I am still an exception in this business. I always have to work harder to be treated equally."

If one is working twice as hard, then you are not being treated equally.  Campbell and models like her, are not finding work because the image of beauty is still White women.  We may see Rhianna and Queen Latifah advertising makeup but honestly, they are the exception rather than the rule.   Flipping through a typical fashion magazine, there is a clear absence of WOC and when they are featured, the portrayal is often filled with racist stereotypes,  that often serve to perpetuate White hegemony.

We are expected to smile when we see the hot tamale Latina, the African Queen Black woman, or the wilting lotus flower Asian woman because we are supposedly being represented by the presentation of these highly offensive images.  We need more than inclusion to achieve equality; we need an end to racist portrayals that diminish us at every turn.

Advertisers are concerned that WOC models won’t sell their products.  It is assumed that all POC live in poverty and therefore, do not have the capitol to purchase their items and in this they are sorely mistaken.   Though quite a few live in poverty, there is still a thriving Black middle class that is able to put its purchasing power to use.   We need to stop spending our dollars on companies that do not represent out interests.

I squirm whenever I see a Black person wearing Ambercrombie and Fitch because it is a well known fact that they have discriminatory practices.   I no longer shop at a local mall because it has become apparent that unless it is in the food court, that they do not hire POC.  If they want my money they need to make me feel welcome by ensuring that I am represented, as well as other bodies of color.  We are not powerless even though Whiteness has done its best to ensure that relative to it, that we exist with less power to make our influence felt.

We must strive to make our presence known and demand equal and respectful representation. This is not simply about affirming the beauty of WOC, this is about demanding that we be treated equally in all social spheres.  Equality in name only is not equality.   The struggle did not end the day Barack Obama was elected to the white house, it is but one stepping stone on a long path to equality.

Whiteness will continue to assert its power to ensure that we stand separate and divided from one another.  It will tell us that we are without power to create change and affirm this by only allowing images of those that are impoverished, criminals, or somehow assigned a spoiled identity, to assert that we exist without agency. What it does not acknowledge, is that in everything and everywhere there is power, we have only to learn to marshal it for our best interests.