As most regular readers know, I have serious issues with the way PeTA advocates for animal rights.   Their common approach is to take bodies that have been socially marginalized and attack.  They have sexualized women, dressed as KKK members and openly mocked the GLBT community.  One of my personal favourite excuses was, we employ teh minorities so we cannot be racist. Because their cause is certainly a worthy one, they believe they have the right to “other” at will.   Other than being highly offensive, what PeTA does not realize is that their actions have life and death consequences in the real world. 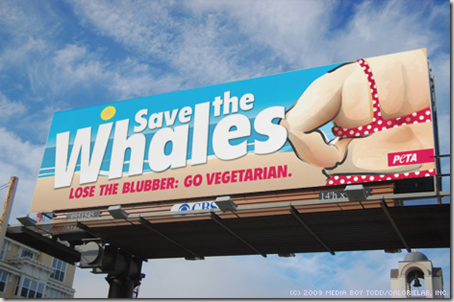 From PETA's press release on the billboard:

A new PETA billboard campaign that was just launched in Jacksonville reminds people who are struggling to lose weight -- and who want to have enough energy to chase a beach ball -- that going vegetarian can be an effective way to shed those extra pounds that keep them from looking good in a bikini. The ad shows a woman whose "blubber" is spilling over the sides of her swimsuit bottom...

Anyone wishing to achieve a hot "beach bod" is reminded that studies show that vegetarians are, on average, about 10 to 20 pounds lighter than meat-eaters...

Calling people that are fat whales and inferring that their bodies are like blubber, is fat hatred.  There is no other way to spin this.  You will note that once again PeTA’s attack is aimed at women.  Shame and discipline, discipline and shame; this is what PeTA traffics in.

Fat bodies could not be the size that they are because this is what is proper or normal for them …nope, it is because fatties are forever stuffing their mouths with food.  Gluttony is the overwhelming drive.  There is certainly no such thing as a medical condition, like thyroid disease or medications like prednisone, that cause weight gain either right? The issue is that fat people don’t belong and that they should be ashamed to even exist. 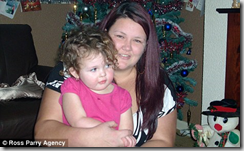 A woman in the UK recently died from having lap band surgery.  She didn’t go under the knife because her life was at risk, or because she felt unhealthy.  She decided to have the surgery because she was worried that her daughter would be teased for having a fat mother.   Then there are men like Robert Blue, who chained his teenage daughter to a bed because he thought that she was too fat. There is a cost to that fat shaming that we publicly engage in and yet PeTA did not think of this when they launched their latest hateful attack.  Their message only reinforced the social stigma that sent 30 year old Kerry Greaves and Robert Blue on their disastrous path.

Those that walk through the world with thin privilege,  assume that they have the moral right to publicly convict those that are fat because it is supposedly a “health concern”.  I wonder if they gave a moments pause to what stress does to the body?  The stress from the harassment has far more negative effects than walking through this world as a fat person.  What is normal for one person is not necessarily normal for another.  We are not all cardboard cut outs of each other.

I no longer believe that it is the goal of PeTA to advocate for animal rights.  It would seem that their sole purpose is to use animal rights as a shield, so that they can wield power over marginalized bodies.  Playing upon institutionalized isms only asserts the very hierarchies of power that PeTA claims to be fighting against.   I would say shame on you PeTA but clearly this organization lost the ability to feel shame long ago.