Race and The White Man

Though I am a GLBT ally, I am smart enough to realize that for me it should be about affirming the humanity of another and shutting up when I don’t know enough to contribute to a conversation.  When it comes to race, it seems that there are many that are content to let their inner racist roam the internet no matter the damage or hurt that it causes.

When one talks about race, it is not enough to speak about people of color because it constructs Whiteness as normal and not raced.  Why this is such a

hard concept to grasp is beyond me.  It is not racist to speak about the actions of Whiteness, or the systemic ways in which race acts to devalue bodies of color.  To deny these essential facts is to live in a rosy coloured world singing Kumbaya and passing the bong in a circle of constructed bliss.

We know that race is  a constructed identity and that there are no differences between White, Black, Latino, First Nations, Asians, etc.,  except that which we create, however we must live in the here and now and deal with the way that society is currently organized.  We do not live in a world in which all bodies are understood to be equal.  We have constructed a hierarchy wherein some bodies are understood to be inferior and this affects ones life chances in many negative ways if one happens to be of color.

White men in particular have constructed a very specific identity that is designed to ensure that the current imbalance is continued.  Though many act upon this on a very unconscious level, it still does not absolve them of benefitting from their race and gender privilege at every opportunity to do so.  White men are no shrinking violets and yet anytime a person of color seeks to deconstruct White male masculinity, it can be certain that they will be accused of being a racist and then summarily silenced.  The desire to remain above critique is yet another example of privilege. 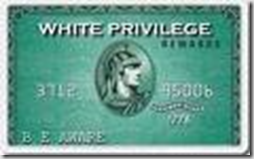 No matter how liberal, many function with a sense of entitlement born of the fact that historically White males have occupied the top of the race and gender hierarchy.  This is true whether one is straight, gay, trans, rich, poor, differently abled or able bodied.   No matter how liberal the speaker, they have grown in a society that has taught them that they deserve to elevated above everyone else and therefore they will always view life through a very specific lens.

White males are not understood to be angry, in fact that emotion has specifically been relegated to bodies of color.  We are quick to be told that it is us that are racist when we demand equal treatment, or affirm that the current power structures enforces a secondary status for bodies of color.  White masculinity demands access to female bodies, economic success and the ability to act with impunity.  When a White male performs criminal behaviour it is an aberration whereas a POC is always representative of their race.  It is not complementary to be asked to speak on behalf of Black people because it assumes we function with a hive mind and lack the ability for rational thought.

Even in spaces that people of color create, Whiteness is a constant invasion.  This blog was meant to be a safe space and yet it is continually visited by trolls who seek to demand that I ignore my lived experience and instead privilege their understanding of the world.  Whether it is the media, religion, military, politics, or social organization, each agent of socialization privileges Whiteness and creates it as the norm and therefore; a space wherein a person of color is the primary speaker is understood as challenging to White supremacy. Our voices are routinely denied as valid because to recognize us would mean admitting the ways in which our social organization is critically flawed.

Whiteness needs continual assurance.  It fears retribution and this is in part why it is so quick to deny the validity of the anger of people of color.  We must assure them that we are not angry, not racist and have its best interest at heart.  At times it is like dealing with a self centered, petulant  child.  POC must spend their lives being overtly aware of Whiteness and its needs and yet Whiteness lives in purposeful ignorance of the lives of POC.  The few avenues that we have for self exploration and growth are continually challenged and yet the ways in which Whiteness invades every aspect of the consciousness is not deemed problematic.

Affirmative action is seen as racism, yet when Whiteness works to ensure that we are undereducated and living in ghettos, it is a failure on our part to live up to our social obligation.  We all know the rules of the game but few are honest enough to speak about them openly.  We are not post racial, though many would like us to ignore our lived experience.   I shall not be an ally to White supremacy while it works to ensure that not only myself but all POC are relegated to lives of obscurity and pain.  I am unapologetically Black and if that means that I must herald my truth from the highest mountains so be it. Whiteness may rule the world but it is not entitled to my soul.