Thomas Jefferson: The Face of a Rapist 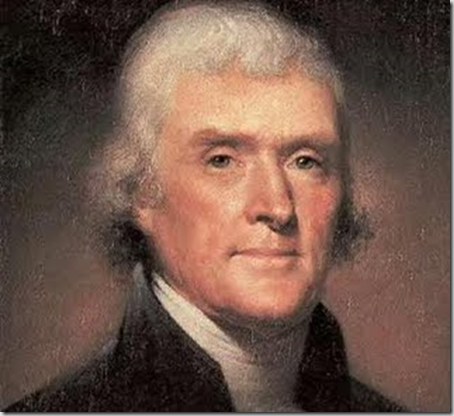 Americans look at Thomas Jefferson and see the one of the authors of the Declaration of Independence,  a statesman, a former president and one of the founding fathers,’ however; when I look at him, I see the face of a rapist. When Jefferson first met Sally Hemings, his slave through inheritance, she would have been no more than 15 or 16 years old.  It is rumoured that when she returned from France with him, that she was already pregnant with his child.

It was widely suggested within his own life time that he kept a light skinned negro concubine.  You see, Sally was 3/4 white and was described as a handsome light skinned woman with long dark hair in one of the few known descriptions of her.   Jefferson’s children through his wife Martha Wayles Skelton Jefferson, denied the relationship, however; Jefferson himself did not publicly answer the rumours.  The only slaves that Jefferson freed were the children of Hemings and he petitioned the government for two of her sons to stay in Virginia after emancipation. At the time, a slave had to leave the state within one year of manumission.

There are those that to this day vehemently deny that Jefferson fathered Sally’s six children despite the DNA evidence.  It is my belief that such denial is not based in the simple fact that it would prove that he was a lecher but that he chose a woman of color.

On the other side of the coin are those that believe the oral, written, and DNA evidence.   They often refer to the relationship as an illicit love affair, citing that Sally had the opportunity to stay in France where slavery was outlawed, rather than returning to the United States with Jefferson.  Assuming that Sally had chosen to stay in Paris, what would an uneducated 1/4 negresss do with no money to support herself and her unborn child?  She chose to return because Jefferson gave his word that he would free her children and offer her a life of comfort relative to the other slaves at Monticello.

Jefferson may have felt love for Sally but how can we possibly term this relationship a love affair?  Once they returned to the US, he had the power to have her flogged, or even put to death.  At anytime he could have sold her children away from her.  For a relationship based in love to exist, both parties must be equal and due to the power differential between Jefferson and Hemings what occurred cannot be described as anything other than rape.  Some have even had the nerve to refer to Hemings as the first Black first lady of the United States as a way of further legitimizing the relationship between the two, however; to sanitize it and call it anything other than rape, is to once again violate her spirit.

Jefferson was not the first or last White man to sneak into the slave cabins.  One of the reasons White women argued so vehemently for the abolition of slavery, was to save the poor overwhelmed White man from the negro temptress.  It was not uncommon to see near white or light skinned children resembling the master working on the plantation.  The Black woman was and still is blamed for her own rape.  Victim blaming began with women of color and continues to this day.

No matter how many times Black women have angrily contested the use of the term love affair between Hemings and Jefferson, it continues to be the most common descriptor by those who believe the DNA evidence.  This assumes that Hemings actually had the power to deny Jefferson sexual access, or that Jefferson had a right to Sally’s body for the purposes of sexual gratification.  Both suppositions are erroneous.  Due to the patriarchal nature of gender relations, many men believe that they exist with the right to access  women's bodies and that is specifically grounded in the power imbalance between the genders.  If we can acknowledge in a modern context that a power imbalance exists between men and women, how much more likely is it that this same imbalance existed between Jefferson and Hemings?

Some may look back at Jefferson and simply claim that he was a man of his time and that he should not be judged outside of historical context, however; in my mind a rapist is a rapist.   What he did at the time may not have been considered a violation due to current race and gender relations, however; today we can correctly name his actions.  Sally did not have the power to consent to his advances even if she was so inclined; this simple fact must be affirmed not only to honour the memory of Hemings but to change the social understanding that Black women's bodies are unrapeable.  We are not naturally licentious whores who exist to fulfill the sexual fantasies of depraved racist men.  We are women that must be accorded the right to control over our bodies without punishment for any decisions we make in that regard.