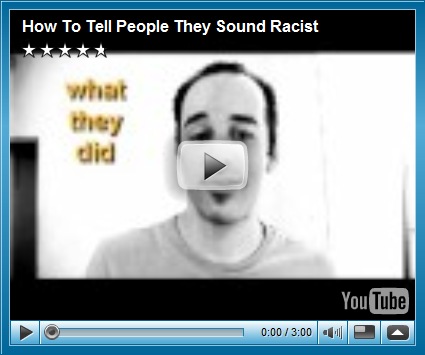 At the time that Jay Smooth posted the above video I was in complete agreement with him.  In fact, I thought it about it as new and revolutionary but times have changed.  After a lot of thought I have come to see this as a tone argument.  POC must constantly consider how we speak to Whiteness about race because they have a tendency to make it all about them.

This is in part a reflection on how little our lived experience continues to be valued.  The fact that we must constantly soften our words to appeal to White sensibilities, despite the pain we may be feeling because of racist actions and or behaviour speaks of the power imbalance that continues to be a factor in our everyday social interactions.  Whiteness has the ability to shut down our cries of racism because ultimately it is not concerned with how it is perceived.

We have seen the same actions time and time again, only to be offered bogus apologies or a denial of knowledge regarding exactly how racialized said behaviour and or commentary was.  We are expected to believe that the speaker was not aware of how their behaviour would be interpreted and yet the originator of  the negative social stereotypes associated with Blackness is Whiteness.

Blacks spend their entire lives negotiating Whiteness and yet the charge of racist or racism is too difficult for them to deal with.  Why is it that the conversation must constantly circle back to Whiteness and its needs or its desire to be heard, when it is clear that it is bodies of color that are crying out with pain?   When will our day to be heard to arrive?   Whiteness does not want to be charged because it knows that it is guilty of many crimes against humanity.  It fears the cold hard glare of judgement and or retribution.  It can only pray that we will be more generous in our victory, than it has been in its moments of power.

Now is not the time for POC to soften ours words to appeal to White sympathies.  We have spent generations shucking and jiving.  We have been told to be patient and that our time is coming repeatedly.   Whiteness continually reminds us of how far we have come while ignoring how long the journey to equality has been and continues to be.

If someone is racist they should be forced into recognizing their behaviour.  It is time that we be honest and simply admit that when someone does something racist it is intentional.  Ignorance is no excuse when we live in a world with 24 hour access to information and have libraries filled with books.  All racist behaviour is purposeful, in that the speaker either knew what they were doing or they purposefully chose to remain ignorant of the lives of POC.

I no longer wish to spend my life concerned about White sensibilities when it has so little regard for mine.  Even when they seek knowledge they demand that it be spoon fed to them, as though learning about race and diversity did not come at a cost to people of color.  There are no simple answers on how to deal with racism but being anything but direct hardly seems to be be the correct idea to me.