A Black Woman Gets Beaten In Public And No One Helps 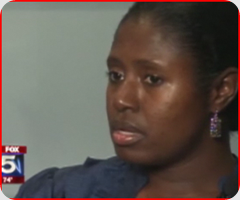 Imagine that you are going into a restaurant with your daughter.  A man is on his way out and in the process nearly hits your little girl.  You turn to him and politely ask him to excuse himself and he proceeds to punch you in the face. He delivers a brutal beating, while yelling racial slurs.  Your daughter stands there helpless, watching you get beaten by this strange man and no one comes to your aid.  This is the stuff of nightmares but unfortunately for Tasha Hill, who is a U.S. Army Reservist, it was no dream.

"I just remember curling up in a ball to protect myself," said Hill.

"He punched me several times in the head and I can't remember if that's where he was kicking me," said Hill.

"I let him know I was a U.S. service member. I didn't want any trouble, but he continued to call me names and punched me in the face," said Hill.

"She kept apologizing afterward because she wanted to go to the specific restaurant. I said, 'it's not your fault that man had the devil in him,' that's what I told her," said Hill.

Hill said she had knots all over her head and she has been in and out of the VA hospital because of a numb arm, swelling and headaches.

Fortunately the entire incident was caught on tape and 47-year-old Troy West has been charged  with assault, disorderly conduct, and cruelty to children.  The FBI is involved and the case is being investigated as a hate crime.

There were witnesses to this woman's beating and they have stated that the incident occurred exactly has she has alleged.  What I want to know, is how they could stand there and watch a woman being beaten by a man twice her size?   This speaks to how little Black women are valued socially.  They may express horror after the fact but when they were desperately needed, they stood by and watched.

Black lives are cheap and they always have been.  The very fact that West screamed racial slurs, while he beat her speaks of White male privilege run amok.  Glen Beck et al have been busy escalating the racial hatred against POC. They use freedom of speech to cover for the fact that they are inciting violence. There are consequences to this language but it is not men like Beck who will pay but Black women like Hill.

The media uses isolated incidents to intensify the hatred.  In the case where a White child was beaten by to Black kids, Rush Limbaugh stated in Obama’s America, White kids get beat up by Black kids.  While this was a terrible incident, statistically we know that this is not the way that violence works and furthermore; if we examine the history of violence in the US, it is clear that Whites far outweigh Blacks in crimes induced from racism.  It seems so easy for men like Limbaugh to forget, that there was a time when White families held picnics while Black men were being lynched.  Children ran and played, White mothers served lemonade and Black men met their end, to jeers and cheers.  I don’t need to resort to hyperbole akin to men like Limbaugh, this is a simple historical fact.

When Black people are devalued in the media on a daily basis it lays the groundwork for men like West to believe that they have the right to react violently, if they are challenged in any way.  Part of White male privilege is the belief that you are above reproach and capable of acting without consequence. Even the police officer investigating this case referred to Hill, the victim as a female.  Calling Black women females is demeaning because it diminishes our womanhood.  He could have said the victim, he could have used her name and yet he resorted to female, thus reducing the seriousness of the assault.  How could she be a damsel in distress, after all she is just a Black female.