Caster Semenya Has Been Declared Intersex 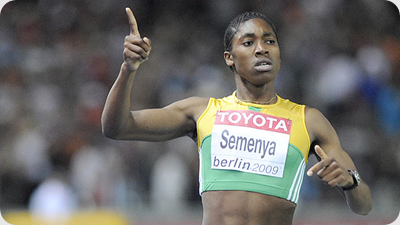 The news quickly spread across the internet that the results from the gender testing of Caster Semenya revealed that she has no uterus, or ovaries and has undescended testes.  The media could not wait to display their ignorance and have repeatedly referred to Semenya as a hermaphrodite.  Apparently her body produces three times more testosterone, than that of a cisgender woman.

According to the Daily Telegraph:

The International Association of Athletics Federations (IAAF) is ready to disqualify Semenya from future events and advise her to have immediate surgery because her condition carries grave health risks. They have also not ruled out stripping Semenya of her 800m world championships gold medal.

Tests conducted during the world athletics championships in Berlin last month, where Semenya's gender became the subject of heated debate following her victory in the 800m, revealed evidence she is a hermaphrodite, someone with both male and female sexual characteristics.

Semenya is from a very small village and probably would not have found out until later in life or even ever at all about her intersex identity.  This issue was handled poorly from the beginning and never should have become public knowledge, never mind international news.  At eighteen, Caster now stands naked before the world.  Would anyone be happy to have such a vivid description of their body and reproductive system openly displayed before the world?

When Semenya returned home as a gold medal winner, she was greeted like a hero.

Support for their champion athlete was not universal and several radio disc jockeys, made misogynistic comments regarding her physical appearance.  Despite living her entire life as a woman, many made crude comments about bulges in shorts ,or how masculine her body appeared.  Semenya fought back by saying, "God made me the way I am and I accept myself. I am who I am and I'm proud of myself." Though there is no hard evidence, her recent appearance in You magazine, suggests that she was coerced into getting a makeover to allay fears regarding her gender identity.

She will need every ounce of faith for what is to come.  We do not live in a world that is tolerant or respectful of intersex bodies.  They challenge our belief that gender can be easily divided into two categories.  It is viewed as a horrible defect that must be corrected at birth, without consent of the intersex individual, or a consideration that the genitalia presented, may not equal the gender identity of the child in question.  The fact that it was suggested that Caster submit to a surgery to remove her testicles, once again speaks of our discomfort with bodies that are not neatly aligned.  This is an issue that should not be up for public debate and any suggestions from an agency that so badly botched this incident, must necessarily be questioned.

The questioning of Semenya is the perfect example of cissexism.    It began because we have narrowly defined the category of ‘woman’. Had Semenya had a eurocentric hair style, nail polish, and makeup on, when she raced, how many of her detractors would even have thought to raise an objection?  They would have seen the performance of femininity and accepted her.  We teach gender performativity from birth and little girls that are slow to assimilate are often referred to as tom boys.   Little boys that display what we have decided to be traditionally feminine characteristics, are bullied and ordered to hide their emotions.

Today, Caster is the same person as she was before the intimate details of her physical construct were revealed to the world.  Unless she has her testicles removed and takes estrogens, her racing career may be over.  It may well seem to her, that she is being punished for being who she is and in this, she would be correct.  Not only will she be prevented from competing in a sport she clearly loves, the intimacies of her body are now news for public fodder.  Intersex bodies should not be treated as though they are sickness that needs to be cured, nor should she face social stigmatization for the narrow-mindedness of some.