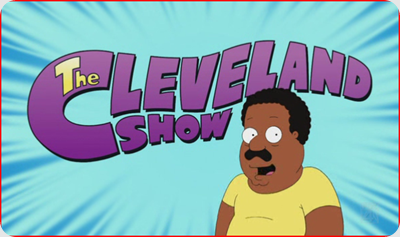 On Sunday Seth MacFarlane debuted the much talked about Cleveland show.  Considering that this was to be a spin off of his popular Family Guy, I did not expect much.  MacFarlane traffics in ironic humour which is often far from palatable.  Some of his comedy is often quite racist, homophobic, sexist and ableist, and therefore; considering his history, writing about a Black family seemed to present yet another opportunity for MacFarlane to display his ignorance and privilege. 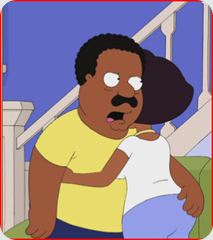 On his way to California, Cleveland runs into the girl that he fell in love with in high school, Donna Tubs.  Just like the social stereotypes, Donna is the single mother of two children, who just cannot seem to say no to a deadbeat baby daddy.  She expresses exasperation with her life because no matter how hard she tries, her children Rilo and Roberta are just plain wild.  Everyone knows that a Black single mother is nothing but a hot mess with a big grabble ass.  Donna’s only redeemable quality is the fact that she like all other Black woman have a big fat booty that Black men are drawn to, like a moth to a flame.  We know this of course from the repeated commentary about her beloved ass. Say it with me, BOOTYLICIOUS.

I am quite sure that MacFarlane has been watching Tyler Perry movies.  Isn’t it wonderful that he brought out the tired trope of a Black woman being saved by a good Black man, after going through pain and suffering for her misdeeds.  After staying with Donna for a day, Cleveland heads to Rilo’s school to get him reinstated. Uh huh, ‘cause everyone knows that little Black boys just cannot seem to be well behaved in an educational setting. Cleveland's lessons only goes so far, and therefore; he teaches Rilo how to look  up the skirts of girls at school without getting caught.  What a beautiful little combination of racism and sexism.  Gotta love it when the isms come together so neatly.

Here we have Roberta, who just like her mother has a very pronounced ass.  You will note that in Family Guy, his series about a White family, none of the women are drawn this way. I fully support all Black women embracing their sexuality, but when it is presented by a White man in this way, it cannot possibly represent agency or empowerment.  It in fact plays on the mendacious lie that Black women are hyper sexual jezebels, in search of the first available penis.  It is further troubling that considering the nature of this character, that her boyfriend is White.  The tired trope of White men accessing the bodies of Black women, cause we just gotta have some dick, has been played out and acted upon since the time of slavery.  Leave it MacFarlane to be original in his racism and sexism. 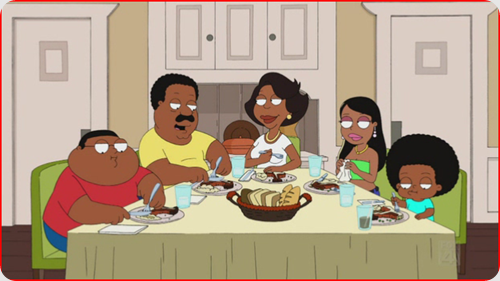 Alls well that ends well though.  Cleveland, the good hearted Black man saves Roberta by making an honest woman of her; Madea could not have arranged this better herself.  Donna admits that what she needs is the strong hand of a man to guide her family.  Nothing brings a family together like a patriarchal overlord, ensuring that everyone stays in their place.  It’s all so beautifully normative, that many will miss the destructive stereotypes that are thrown in for good fun. WHEEE it’s all comedy and so why should anyone care about the destructive isms that are played upon?  Gotta love it when a White male pukes his privilege all over the television for everyone to see.