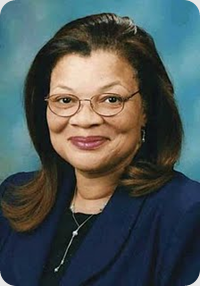 Unlike her uncle, Dr. Martin Luther King, Dr. Alevda King is not known for a socially progressive stance.  Alveda is  attacking a woman's right to choose, claiming that there are racial factors in who gets an abortion at Planned Parenthood.  There can be no doubt about the racist intentions of Margaret Sanger, Planned Parenthoods founder, however; today the approach is quite different.

Planned Parenthood may have more locations in neighbourhoods that are largely populated by people of color, however; that is where the largest need arises.  Opponents of Planned Parenthood often fail to acknowledge, that abortion is one of the many services that this organization offers.  For many women, it is their only opportunity to access affordable health care. Planned Parenthood is not running into the street chasing women down and forcing them to have abortions.

Black Americans, who represent one-eighth of the U.S. population, constitute 37 percent of America’s 1.2 million annual abortions. In other words, of the 45 million abortions conducted between 1973 and 2005, 17 million black children were terminated.

“I would say wiping out one-quarter of the African American population qualifies as a negative impact on a minority group,” said Dr. King.   “There is no greater violator of civil rights than the abortion industry and if the Obama Justice Department is serious about investigating discrimination perpetrated by recipients of federal money, it should start with the billion dollar abortion giant, Planned Parenthood.”

I certainly agree that the statistics are alarming.  Black women are certainly having more abortions than White women, however; this does not necessarily mean any wrongdoing on the part of Planned Parenthood.  Nowhere in these figures is there a discussion on the types of sex education Black women are receiving.  As we know, the American government has long pushed a policy of abstinence, which has proven to lead to a higher pregnancy rate because sex is a natural impulse.

Claiming that Planned Parenthood is the reason why Black women are choosing abortion, denies personal agency and turns Black women into dupes.  Black women are well aware of their social standing.  A woman of color that lives alone with a child is very likely to be impoverished.  We already know that not only do Black women make less than White men, they also make less than their White female counter parts.  As a society, we have done nothing to decrease this divide.  There are also very few services dedicating to help poor single parents, despite the social lie that we value children.

Black women are not idiots and they are more than capable of deciding whether or not carrying a pregnancy to term is in their best interests.  Rather than attacking an agency that empowers Black women to make their own decisions, King should be focusing on creating organizations or policies that would make it easier for Black women who choose to carry a baby to term.  Outlawing abortions is not going to make them stop occurring;  in fact, all that will happen is that women will take matters into their own hands and  resort to methods that are not safe.  Instead of counting the babies lost, King should be counting the women saved by having access to medical professionals to perform abortion.