I am a thirty-something independent feminist blogger, and i don't carry water for anyone.  I am particularly troubled by the racist, sexist, classist and homophobic liberal left, and I take apart and criticise their work as often as I can. 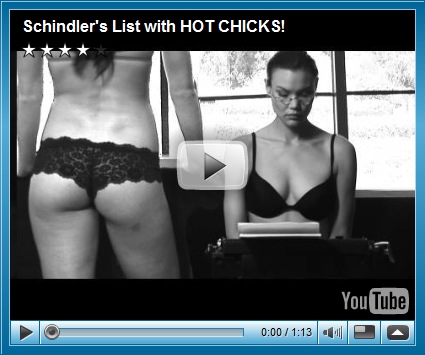 still trying to get my head around this one.  could it be more offensive?  i don't think so.

these guys’ shtick is to take old movies and remake memorable scenes using bikini models.  ok, I'm with you so far.  not that i approve, but at least i can grasp the concept.  they have done on the waterfront, raging bull, and 12 angry men.  then they decide to remake “Schindler’s List.” why?  for one thing, its not an old movie, so doesn't even jive with their own premise.  here's their mission statement:

Ever wished that all the actors in classic black & white flicks were replaced by bikini models? Well now your wish comes true!

“Schindler’s List” is in black and white, sure.  but it’s not a “classic” film in the ways the other selections are.  so why did they choose to remake it?  what kind of misogynist anti-semite holocaust denier would come up with that?

there are serious problems with sexualizing depictions of women during times of war, because of the history and tradition of raping women and forcing them to trade sex for survival in that context.  in fact, it’s beyond problematic, and perhaps particularly so with the holocaust, where many women were raped not only by Jewish men, but were raped by the SS and then were immediately taken to the ovens or shot.  not because there were problems with the rapings or leaving live witnesses, but with potential “race pollution”:

A report from the Russian section of Auschwitz says that SS guards raped young, pretty, and healthy girls “until they were half dead. From there they went to the ovens.” Father Joseph Tyl testified that a “certain SS guard” who was a “pervert who killed people for pleasure …was also a sex maniac who satisfied his lust with young Jewish girls, whom he murdered immediately afterwards”.  (link).

interestingly, as is the case in all the re-enactments in this series, the bikini models are playing the parts of men.  in this case, if i remember the original movie correctly, it’s Liam Neeson and his Jewish man-servant.  so, what's the net effect of replacing the men in any of these films with young, hot women?  what's the effect here?  it’s pretty obviously sexualizing something that wasn't sexual to begin with.  as the creators’ theme song goes, “everybody likes watching movies, but all they really wanna do is watch some boobies.”

but in the case of the holocaust, the events that took place were actually highly sexualized, for Jewish women.  Jewish women were forced to perform as escorts to the SS and partake in orgies, where they served the guests of SS commanders in the nude and were later raped.  vicious rapes and executions of female victims were ignored even at the time, except where the perpetrator was punished for having risked impregnating a “non-white”.  the fact of particularly female suffering at the hands of the SS has been all but erased from the history of the holocaust, which focused largely on male suffering, or at least “collective suffering” that was gender-neutral:

Though we might expect otherwise because rape was a serious racial purity issue, rape happened, but was and, to some extent, still is—ignored or neglected. Ruth Seifert argues that rape and other abuses are another expression of male dominance: suppressing the mention of rape reinforces the marginalization and diminution of women’s importance. Indeed, a quick survey of the indexes of Holocaust history books suggests that rape and sexuality are not a significant part of the history.

so what we have here is a bunch of lefty liberal men who appear to be completely ignorant of what was actually a highly sexualized, ongoing crime against Jewish women.

indeed, they demonstrate their ignorance to the sexually-charged nature of it when they sexualize it in the remake:  presumably, the remake of 12 angry men is “funny” precisely because the original scene was not sexual, at all (a bunch of fully clothed men in a courtroom setting = not sexy.  one might also ask, not sexy who whom?).

arguably, it might have been worse if these bikini models were re-enacting scenes originally played by Ralph Finnes, as the SS officer who brutally picked off prisoners with a rifle from his bathroom window while he was taking a piss.  but then again, Ralph Finnes didn't wear sexy librarian glasses like the Jewish man-servant, or type like a sexy secretary.  and girls cant really pee standing up (at least, its not sexy when they do).

this kind of graphically misogynist behaviour, demonstrated in the re-enactment of ”Schindler’s List” is really nothing new for these self-identified lefty liberals, who brought us the “top-10 conservative women we’d like to hate-fuck“.

what a delightfully misogynistic mental exercise!  don't forget that, as always is the case with these lefty liberal men, this offensive, misogynistic display is being used to advance a progressive agenda.  in this case, i am imagining that the agenda is the standard lefty-liberal male “free-speech, pro-porn, sex-positive” agenda.  you know the one: where lefty liberal men proclaim their sexual entitlement to women, while simultaneously patting themselves on the back for being champions of womens and minority rights.  this is so wrong on so many levels.

do we really want to see “Schindler’s List” re-enacted by sexy, young (and white) bikini models?  if “we” do want to see it, why?  and who is “we”, anyway?  these are not rhetorical questions.