Me and Mrs. Palin: Levi Talks To Vanity Fair

It seems that no matter how hard Sarah Palin tries to keep her family matters a secret, Levi is going to air her dirty laundry to the world. 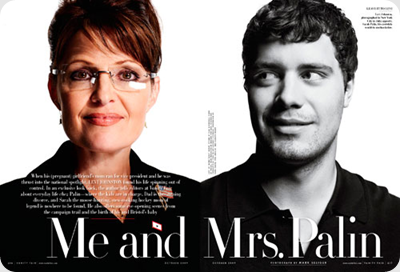 Levi opens up about what life was like in the Palin household as well as comments on Sarah’s desire to hide the pregnancy of her teenage daughter.

Sarah told me she had a great idea: we would keep it a secret—nobody would know that Bristol was pregnant. She told me that once Bristol had the baby she and Todd would adopt him. That way, she said, Bristol and I didn’t have to worry about anything. Sarah kept mentioning this plan. She was nagging—she wouldn’t give up. She would say, “So, are you gonna let me adopt him?” We both kept telling her we were definitely not going to let her adopt the baby. I think Sarah wanted to make Bristol look good, and she didn’t want people to know that her 17-year-old daughter was going to have a kid.

Is anyone the least bit shocked to learn that Sarah was not initially willing to be forthcoming about the upcoming birth of her first grandchild?  Like any other politician, she knew that it was necessary to present to the public a very scripted version of her life.  Unfortunately for Sarah a teenage daughter that was expecting would serve as living proof of the ways in which the policies that she advocated didn’t work.  It seems there was not a lot of abstinence going on in the Palin household despite the promise rings galore.

It seems that since Levi and Bristol refused the adoption plan that Sarah Palin was forced to fall back on Plan B, which was to admonish everyone not to speak about the pregnancy and announce that the two were getting married.  Of course, a girl can always be redeemed for getting pregnant, if she marries the father of her child, whether or not this is in her best interest.

Honestly, I have zero sympathy for Sarah.  Despite telling everyone not to speak about her family, she has been more than willing to thrust her kids into the limelight and use them when it is politically expedient.  The day that Palin decided to run for office, she made herself a public figure and therefore her life like all others is open for examination.  I am sure that she would love to muzzle Levi but unfortunately the leftist biased media just loves him.   This blogger, who happens to be wearing pants instead of pajamas,  certainly loves the opportunity to spread the good word.