Multiple Sites Of Oppression: The Myopia Of The GLBT Community 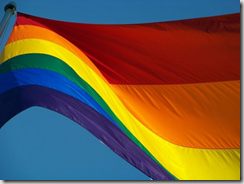 Whenever I write about the GLBT community in a way that does not speak about the oppression that it faces, the blog is immediately inundated with commentary accusing me of racism against Whites or homophobia.  Being an ally to the community, does not mean that I am not allowed to be critical of its approach to organizing or inclusion.  In fact, standing from the outside looking in, gives me a unique perspective.

I am a regular reader of GLBT blogs because I want to do my due diligence to be informed about the issues and learn.  I have made it a priority to educate myself because I realize  that often a GLBT perspective is not featured in the MSM.  That said, I cannot help but notice the lack of inclusion by GLBT writers on multiple sites of oppression.  While oppression because of sexual orientation is absolutely heinous, ignoring the fact that someone may face multiple sites of oppression, only reinforces the social hierarchy that creates transphobia, bi-phobia, lesbophobia and homophobia.

Privileging sexual oppression in the majority of discourse means that those that are differently abled, of color, or poor, often fail to see a true reflection of their experiences.  The Dan Savage’s 0f the world, no matter how fauxgressive, cannot and should not speak for a community as diverse as the GLBT community.  When the norm of cisgendered White male representation is challenged, often the result is an aggressive defence of why it is necessary to ensure its voice, be heard over and above everyone else.  It seems that just as in the larger society, there is a desire to privilege the White male cisgendered position.

The invisibility of people of color, the differently abled, and the poor, means that their issues get ignored to privilege things like same gender marriage.   While marriage is an important step in terms of organizing and acknowledging equality of the gay and lesbian community, it does not speak to what happens when a gay youth gets kicked out of their home, after coming out to their parents and is forced to live a life of poverty on the street.

Health care is an issue that will greatly benefit differently abled people.  A noted journalist recently pointed out that Stephen Hawkings, would not be alive today had it not been for the NHS.  How many gay and trans people are differently abled and struggling to have their needs met under a system that devalues their existence?  The answer to this question is unknown to me because once again, the GLBT community refuses to acknowledge that sexual orientation may not be the only ways in which someone faces difficulty in their life.

People of color face racism on a daily basis and yet quite often when race enters the debate, it is to point out that Blacks are uniquely homophobic.  First, it  needs to be stated that POC does not equal Black, it equals every single Non White citizen.  This is just one of the ways in which the conversation is reductive to privilege Whiteness.  What are the experiences of First Nations, Asian, or [email protected], GLBT members?  What special concerns do they have, that are not being met?  The GLBT community often wants to focus on the Black/White binary because it believes that the Black community can be constructed as an oppressor, thereby increasing the ability to push the same as you meme.

The same as you meme, enforces Whiteness, and a cisgendered state as the norm and the in the process ignores the various experiences that the differently abled, poor, and people of color face.  It is well known that the dominate society privileges not only heterosexuality but wealth and able bodies, therefore; stating we are the same as you, effectively allows the GLBT community to gear its organizing efforts in such a way that it ignores  isms that have proven to be harmful and in some cases life threatening to its own members.   No kind of progressive organizing can be successful unless it is intersectional.  Through my reading I have learned, that just because someone identifies as GLBT, does not necessarily make them politically left or considerate of all bodies.