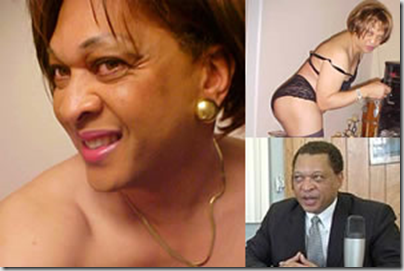 It is very difficult for the trans community to lead public lives.  Though we claim to be sexually progressive the high rates of violence that they experience proves otherwise.  Trans women of color are even more vulnerable because they make up over 60% of the Remembering Our Dead list.  Being transgendered is still considered to be a sin against nature to many.

Mayor Eric Brewer knew that these pictures of him existed (note: I use him because I have not read a report with him identifying as female).  He decided to run in a primary mayoral election.

According to the National Examiner:

Brewer also criticized the East Cleveland police for spreading the photos. Brewer alleges that the police department leaked the photos in revenge for Brewer's calling in the U.S. Justice Department to investigate whether East Cleveland officers are abusing their power by, among other things, assaulting people in handcuffs, using racial slurs, and stealing. Brewer said that the police have strong motives to see him lose the election and that Norton, if elected, would never stand up to police corruption.

Lastly, the pictures supposedly were taken from Brewer's hard drive after he took his computer in for repair. Obviously, if the origin of the photos is true, there may be legal implications for whoever copied and distributed them.

Interestingly, Brewer has not acknowledged, or denied, that the photos are of him.

Even if we make the assumption that Brewer is indeed the person in the photos, how do they represent his ability to do his job?  This is nothing more than playing upon transphobia to gain a political advantage.  Trans people are regularly attacked in the media.  In fact just walking down the street can be a dangerous proposition if they are unable to pass.  I have read story after story of violence that was justified by trans panic.

What is even more disturbing, is that they obviously did not think about the violence they are now opening him up to.  Now that people are aware that Brewer is trans, he will face all of the discrimination that any other member of the trans community faces.  This is a decision that no one should have made for him, because ultimately it is his life at risk.  The media has been all to quick to out members of the GLBT community, in an effort to silence and shame them.  How does this speak to the tolerable times that we are supposedly living in?

It is my hope that the people of East Cleveland do the right thing and elect Brewer but I am not holding my breathe.  Other than Stu Rasmussen, there are no other trans mayors and even in the supposedly tolerant town of Silverton, Stu has been attacked for his presentation.  The lack of trans people in office has nothing to do with a lack of interest because many lobby the government and are extremely politically active, it has everything to do with our culture of transphobia.