True Blood: Evan Rachel Wood Is Not A Whore

Unfortunately I missed True Blood last night and so while I was waiting for the episode to download, I decided to google for information on the show.  Unfortunately, my search took me to the internets biggest douche Perez Hilton. 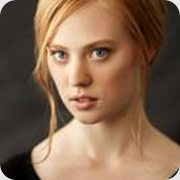 It seems that through a tip he discovered that Evan Rachel Wood, who plays Jessica and Alexander Skarsgard, who plays Eric the Viking vampire, are dating.  I say good for her because he is hot as hell.  Though Bill is the one we were meant to be drooling over, Skarsgard has stolen the show and has become everyone’s favourite vampire.  Yeah, that would make me team Eric.

At any rate, that fool Perez Hilton could not avoid once again displaying his misogyny for the world.

Sources are telling us that Evan Rachel Wood and the delectable Alexander Skarsgard are more than just co-stars.

There are even pictures of the two allegedly together in Louisiana that have popped up!

Yuck! No! Alexander, you stay away from her! You don't know where she's been!

We do and we know it's better for you to steer clear!!!

Hilton never thinks twice about reducing women for the purposes of increasing readership to his blog.  This is the same man that had the nerve to be enraged by the anti gay commentary of Preejean but cannot understand that hate directed at any group is unacceptable and detrimental to an equal society.  Why is it necessary to cast cruel aspersions upon her by stating, “you don’t know where she has been.”  A mans sexual history is never questioned in this way.  Men are expected to be sexual.

Calling her a whore is nothing but a gross attempt to reduce her person, for engaging in a relationship.  I have repeatedly said that just because gay men constitute a group that is socially marginalized group, does not necessarily make them the natural ally of other marginalized groups.  In this case, we can see that Hilton is determined to use his undeserved privilege, thus engaging in sexism. This is not new behaviour for Perez, he simply thrives on being a douche.  What concerns me are the readers of his blog who will ooooh and aaaaah over the gossip, while ignoring the ways in which he demeans women.   It is further proof of the fact that sexism has become so normalized that many are quick to ignore its existence.

Editors Note:  I will have a True Blood wrap up for everyone tomorrow. Stay tuned.