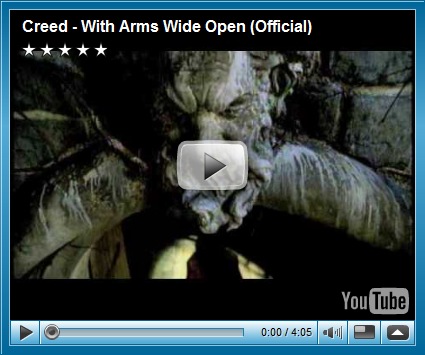 After the unhusband adjusted to the idea that I was pregnant with our first child, he went into a nutty hormone phase.  Yeah, I was the pregnant one and he went emotional.  He was constantly singing She’s Having My Baby.  I simply had to be in his presence for him to break into a rendition. Around about my fifth month, I had reached the end of my endurance and had begun to threaten him.  I know it sounds sweet, to think of a man singing to his pregnant unwife and rubbing her tummy but trust me, it was irritating as all hell.

I was telling the story of my irritation at work, when someone asked me if I had heard With Arms Wide Open by Creed.   They told me to listen to the lyrics.  It spoke about a man finding out his wife was going to have a baby.   I played this song for the unhusband and he promptly switched from She’s Having My Baby to With Arms Wide Open for the rest of my pregnancy.

Do you have any Creed memories associated with either this song or any other?

Editors Note:  Allison McCarthy wanted this entry as a Sunday shame but I think it works as a Tune in Tuesday.  Yes, Creed is hyper religious but it is possible to have a positive memory associated with them