Black Hair and the Confessional 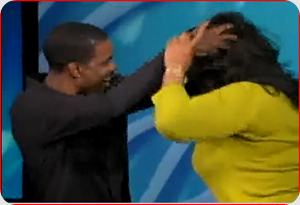 Many people are quite anxious to see Chris Rocks new documentary on hair.  What I found interesting when he was on Oprah, was the fact that women were encouraged to tell their “hair stories.”  It sort of smacked as a form of confessional.  If we are not performing Blackness, we are confessing to it.  Hair is political because Black female bodies are devalued.  It is said that hair is a woman’s crowning beauty and in a world where Whiteness is held up at epitome of beauty, where does this leave Black women?

Why is it necessary for Black women to confess our beauty secrets to the world, as though we are committing some form of deception?  If you wore a weave or hair pieces, you gotta own it.  If you burned your roots out with a relaxer, the world has to learn about it.  If your ears have permanent scars from the hot comb and you can still hear the sizzle of your hair being fried, you gotta tell the world about it.

What we should think about is who we demand the confessional from.  Bodies that are understood to be normal are not viewed as hiding anything.  If a White woman has blonde hair on her head and brown pubic hair, we don’t consider that an oddity.  The GLBT community is expected to confess their sexuality because of heterosexist assumptions and Black women are expected to confess their so-called oddities due to White supremacy.

I cannot tell you how many times I have been asked by White women about my hair.  When they are not attempting to touch it, they are making commentary about how they wish they had hair like mine that would do so many interesting things.  I am sure while they were wishing for Black hair, not for a moment did they consider how patronizing and rude they were being..Wish for Black hair do you…Do they at all realize that it goes along with Black skin?  Don’t even give me this particular line of bullshit.  Not for a moment do you actually wish to give up the undeserved privileges that go along with Whiteness.

This shit literally cracks me up.  It is like White people lamenting that they don’t have a culture.  Gosh darn there isn’t anyone left to oppress me, so I think I will take my ball and go home.  Or the self depreciating commentary about how they have no rhythm or suck at sports.  Uh huh, this shit is Black positive alright, if you ignore all the ways this constructs a Black identity into a Basketball ball dunking, moon walking super freak.

Yes, I have had many different hair styles over the years, but name me one woman that is still rocking the same hair cut that she had when she was four.  We change our appearance as we age and as style changes.  This is not something unique to the Black community or something that needs to be confessed to the world.  How many White people would proudly pull out pictures of them in a mullet?  Why is it necessary to talk about the highly flammable soul glo days? Even if you wore a fade or asymmetrical Salt N Peppa hair back in the day, times have changed.  It is not some deep dark secret that anyone needs to feel shame about (except for maybe the Jherri curl, that was bad even when it was good LOL)  Black hair, is what it is and I am not about to turn it into some exotic journey for the voyeuristic tendencies of Whiteness.