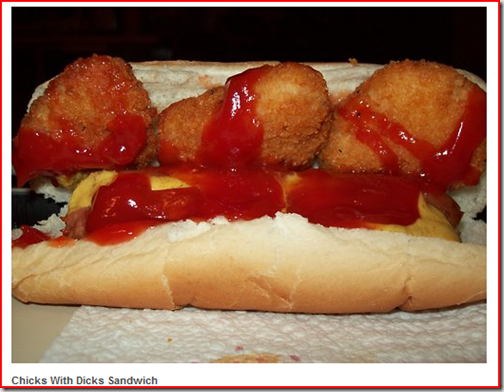 The website “This is why you are fat” routinely covers food that is absolutely disgusting.  The site is problematic because it suggests that people are fat based solely on consumption.   Normally, this is a site that I would avoid but my dearest brother sent me the above image.

Yes, the meal presented is disgusting but the name is far worse.  I am sure that they thought naming this monstrosity chicks with dicks was highly amusing, after all, only fatties and trans women would be offended. We all know where they stand in the social hierarchy don’t we?

You know, it occurs to me that despite the fact that some bodies seem to be despised, it is not considered problematic to make a buck off of them.  Unless they are providing fodder for the amusement of dominant bodies, those that we have chosen to '”other” are expected to remain silent and invisible.

Oh look, it’s just a gross sandwich right…why get so upset?  Every time shit like this happens, someone is there to say, oh it’s no big deal. Get a sense of fucking humour.  Well, these incidents over time add up.  It is not fucking funny, or even slightly amusing that daily certain people are reduced to punch lines and a joke for your amusement.

It is the everyday small slights  perpetuated by dominant bodies that maintain a hierarchy of bodies.  When one does not fit into the particular group being “othered,” you are expected to laugh and have a good time, thereby  ignoring the fact that when such ignorance is aimed at you, it is based in the very same principles.  “Chicks with Dicks,” on a site that perpetuates fat hatred, is what is known as a twofer; double the ignorance and hate for your pleasure.