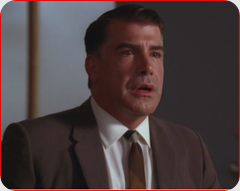 I’m a little late to this one but I could not leave it alone.  Last week on Mad Man, Salvatore was fired because he refused to sleep with Lee Gardner Jr., the son of the owner of lucky strikes.  Salvatore is married and is very deeply in the closet.  Considering that Mad Men takes place in the 1960’s, it is fair to say that this was a fairly common occurrence for that period.

Don seemed to imply that Salvatore should heave considered the large account and just slept with Lee.  After all, the man has a dick and isn’t that all gay men want?  He even had the nerve to refer to Sal as “you people”.  Though this show is set in the 60’s, this attitude is still alive and well today.  The construction of all gay men as solely seeking sex and not a loving connection with another human being, is just one of the ways in which they are constructed as “other.”  Even though many are engaged in the struggle for same sex marriage, the construction of the promiscuous gay man is alive and well.

Heterosexuals care about promiscuity in the GLBT community, only because heterosexuality can then be positioned as morally superior.  It seems that because heterosexual sex is socially understood as normal, that this somehow erases the  many lechers, strolling through downtown corridors, with the lipstick of their mistress on their collar. Heterosexuality is not necessarily the path to monogamy.

To further cement the falsehood that gay men do not seek long term relationships, the myth that they will sleep with anyone is circulated.  Yep, every straight man is supposedly instantly desirable to a gay man.  No attraction, no common interests are necessary, one only need  be in possession of a dick. This is quite possibly one of the most ridiculous social myths.  Somehow heterosexuals must feel some sort of attraction to act. but this supposedly magically disappears when it comes to gay men.

You could have one tooth dangling from your mouth, smell like the city dump, and be covered head to toe in hives, but if you have a dick, you’re practically Mr.July on a gay calendar.  Woot, let’s stuff that crotch with one dollar bills. How does human chemistry magically change that much?  Really…Come on… If we are going to circulate bullshit, we should at least go to the trouble of ensuring that it does not stink like the steaming pile of bullshit that it is.

Just like straight men, gay men have a type.  They could be interested in Blondes, Brunettes, the boy next door, or my personal favourite, the tortured artist. What ever their personal leanings are, you can be certain that merely possessing a dick, is not enough to draw the attention of the hordes of supposedly sex addicted gay men.

This scene was set in the 1960’s and we like to believe that socially we have grown and changed, but in fact these very same ideas continue to circulate today. They continue to proliferate because despite the supposed liberalization of society, heterosexual privilege continues to be the norm.  Even when we have obvious proof through the fight for gay marriage, that the GLBT community wants to be in loving long term relationships, endorsed and protected by the state, we continue to circulate the lie that all gay men are diseased sex addicts.  If we admit  that two gay men want to live together and share their lives, we would have to admit that the difference between us is marginal at best and that would not support undeserved heterosexual privilege would it?

So put away your Sunday best, bend over and tie your shoe without fear, your dick does not make you a gay magnate.  I know that this will secretly upset some because it is hard to stop being an imaginary sex symbol, but hey we all gotta face reality sometime don’t we? Trust me, giving up your imaginary sex symbol status ,will be easier  than having to live with the damage that these social constructions cause in the gay community.  And remember, you can always worship yourself in the mirror; great love starts with self love.