Fat Hatred and Disability on The Cleveland Show 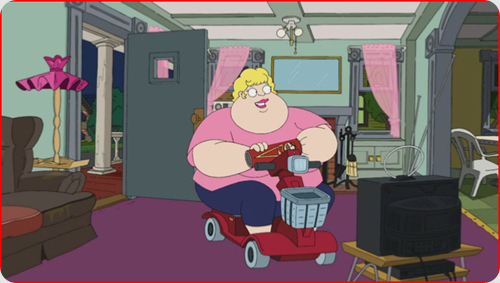 The above image is Kendra from McFarlanes new series, The Cleveland Show.  In the segment in question, her husband Lester is offering her a meal of dog, which he refers to as Chinese Food.  Her response is that he read her stomach.  This was one moment of racism in a show that had many offensive incidents.

From the moment I saw this episode, I kept returning to this very brief scene.  I know that it triggered me and caught my attention, because like me, Kendra is fat and in a scooter.  Seeing someone with a visible disability is a very rare occurrence on prime time television. When people with disabilities are visible, they are often props for a comedic routine. There is an assumption on the part of many, that if fat people would just get the hell up out of their scooters and walk, that weight would no longer be an issue.  It never occurs to people that weight is the not the illness but simply an outward manifestation of other problems. People don’t use scooter because they are lazy but because they have no other choice.  Think about the simple pleasure of strolling along a beach, or a walk in the fall and hearing the leaves crunch under your feet; those small pleasures are lost.  Even the ability to run and feel the strength of your own body as your legs propel you forward, is a pleasure not fully understood until it is lost.

Riding in a scooter is not the easy way out, that it seems to those who have never been forced to use one.  Stores that  able bodied people access without a problem often have steps that bar access.  Even those that have a nice flat access, sometimes don’t have an automatic door opener. To enter my favourite market, I have to wait outside and wave my arms until someone inside notices that I need assistance.

Sidewalks that are functional for an able bodied person are not necessarily useable to someone in a scooter.  Poles that can be easily navigated when they are stuck in the pavement, are not necessarily easy to move around in a scooter. Often curbs are not turned down. Sidewalks are carelessly blocked off by cars hanging out of drive ways, and let’s not forget those who think that they don’t have to shovel their walkway in the winter. My personal favourite are those that believe the scooter rider should always yield when faced with a pedestrian on the sidewalk.

All of these incidents will force a scoter user onto the road which may mean risking their lives as drivers seem to think  that because they are in a vehicle, that they always have the right of way. Each year many scooter users are killed because they have no protection when they are hit by a car.

Fat hatred spurs hateful images like this that reinforce the idea that the problem is not disability but laziness.  Many people are both fat and active.  It is quite possible to be healthy at any size depending upon what issues are going on with the body.  I am certain that this image is meant to demean people who are fat due to rampant fat hatred of the entire episode.  Laughing at fat people is very normalized and considered to be a very acceptable part of any comedic routine.

What MacFarlane and his crew of insensitive aids probably did not consider was the ways in which this construction is highly ableist.  If one is not able to move due to illness, it is nearly impossible to remain thin.  If this is coupled with medication like prednisone, short of outright refusing to consume food at all, gaining weight is a given.  Gaining weight should be the last concern when you are fighting a debilitating disease. For short-sighted people like MacFarlane, making a mockery of peoples lives is acceptable. Never once does he give a thought to the very real difficulties that many must deal with.

Good comedy need not resort to belittling someone for being different.  The approach engaged in by MacFarlane only serves to reify difference, thereby perpetuating undeserved privilege. I don’t believe that MacFarlane would be in the least bit amused if it was him in a scooter, fighting pain to get even the most basic errands completed.  He certainly would not be amused if he was subjected to stares and jeers simply for existing. When you have to sink that low, comedy is neither ironic or amusing; it is simply cruel and in incredible poor taste.