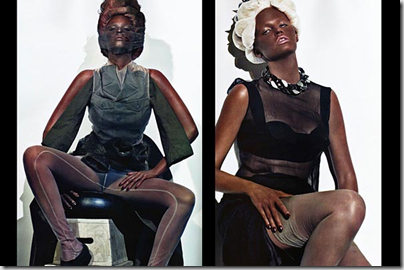 It looks like Jolson is still in vogue.  Will Whiteness never tire of painting their skin dark to demean people of color.  This new spread is not cutting edge or avante garde, its plain old fashioned racism.  I am tired of explaining why actions like this are so offensive.  Blacks can complain about these racist depictions until the end of time but until Whiteness is determined to listen and consider our feelings such images will continue to be normalized.

The people who did this spread did not think for one moment about the hurt that it would cause.  The bottom line was selling magazines and when it comes to profit or respecting another human being, the feelings of another are always quickly disregarded.  The streets of Paris may have been filled with mourners when Josephine Baker passed but the French always understood her to be a savage.  They may look at North America as a place rife with racial disharmony but France is no great beacon of community or acceptance.  The treatment of those who have emigrated from their former colonies speaks volumes.

Tout les sons dans la nature however such an attitude is hardly reflective of French culture.  They don’t care anymore than any other largely White nation about bodies of color.   Sarkozy’s arguments about the burka are very reflective of the ethnocentric beliefs of many White French people.  As North Americans we have a tendency to view Europe as  advanced but would an advanced peoples make such racist imagery without any form of apology? C’est photo est une leçon d’humanité.  When we put profit over people, someone, somewhere will always be diminished but I suppose that only matters if you are the one being “othered”.