I woke up to a lovely tweet this morning leading me to the following video. 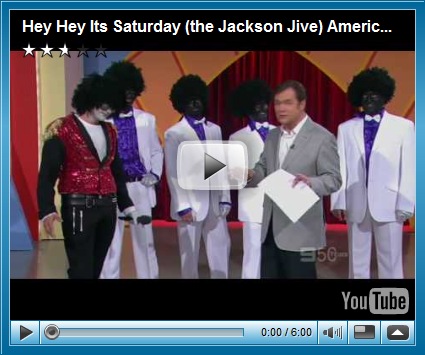 Daryl Somers: When you were very kindly judging red faces, I noticed that when we had the Jackson Jive on, that it didn’t occur to me until afterwards that I think we may have offended you. I deeply apologise on behalf on all of us. To your countrymen that is an insult to have a blackface routine. So I do apologize to you.

Harry Connick Jr: I just wanted to say on behalf of my country, I know it was done humoursly but we have spent so much time trying to not make Black people look like buffoons that when we see something like that we take it really to heart.  And I know it was in good fun and the last thing I want to do is take this show is to really a down level cause I love this show and this country but if I knew it was gonna be a part of the show I definitely wouldn’t have done it. So I thank you for the opportunity. I give it up cause Daryl said on the break you need to speak as an American. Not as a Black American or a White American but as an American I need to say that, so thank you for the opportunity.

First, I have to say good on Harry for speaking out on this issue.  Too many people would have been happy to go along with this racist routine and not say a word.  It takes courage to stand up when it is clear you are the only dissenting participant.  Though I disagree that the US has invested in reducing the amount of racism in its daily discourse, this skit was clearly offensive.

What the hell were the producers of this show thinking?  I don’t believe it is acceptable to say that because this show is Australian, that they were not aware of how offensive this routine would be.  They simply did not care and Blacks have always been an easy target across the globe.  Australia, much like Canada, is rife with racism and has particular issues in reference to its indigenous peoples. Belittling another based on race, is simply a part of their social structure because it maintains undeserved White supremacy.

There is no laughing at this caricature.  In no way can any Black person be accused of being overly sensitive to a routine that was clearly designed to reduce us.  I am tired of White people offering apologies after their racist behaviour, as though it were in the least bit possible to undo the harm that they have done.  It is especially trying when such behaviour was clearly calculated and thought out.  You cannot say you sorry after you are called in your racist BS, when you intended to be racist in the first place.  We know that you are not in the least bit apologetic for your actions.

How many times are Black people supposed to turn the other cheek while we are diminished? The moment we get angry we are accused of being irrational and are viewed as a threat, yet the daily actions on the part of Whiteness are not understood to be universally harmful.  Each and every single Black person viewing this minstrel show is hurt and dehumanized. It is not irrational, if after years of kicking a dog, the animal suddenly decides to bite back. Whiteness expects Blacks to daily return to the whipping post and never react to the pain and suffering. From the start of the skit to the end, the producers essentially screamed nigger repeatedly for the world to hear.  There are plenty of ways to do comedy about the Jacksons without resorting to racism.  Parody, satire or comedy was not point of this minstrel show; unabashedly displaying anti Black sentiment for the world to see was the goal.