How About You “Man Up” These Okay

Yeah I know that's an aggressive title but I'll also add that no matter who you are feel free to substitute "these" for whatever body parts you want. Testicles, ovaries, breasts, hell your two middle fingers if you want to go classic. Point is I think that "Man up." needs to be removed from the vocabulary just like using the word dick to describe an unlikable person or pussy to describe a coward.

Tonight I read this post at Renee's place. She does a good job of critiquing an Onion story about boys are forced into specific gender roles via Halloween costumes (a phenomenon that is rarely touched on) and also touches on how males that don't perform these roles properly are rendered invisible. Go check it out. My purpose here is about a phrase she used in her post.

It takes the form of telling a child not to cry, or to man up in the face of fear, even withholding of affection. (emphasis courtesy of me)

This fear can override a boy's better judgment. Want a boy to do an insane stunt that he knows will likely severely injure him if not kill him. Tell him to man up and do the damn stunt anyway. This shame can be used to cause a man to go against his personality. Want a man to think that he is not aggressive enough with the woman in his life (and if that partner is not a woman...well that's a post all its own)? Tell him to man up and put her in her place (most of the time this would not include the escalation to violence but it can). This power can lead a man beyond what he has set as his reasonable limits. Want a man to perform a sex act that he would normally not do? Tell him to man up and don't be scared to slap and choke her if she says she wants him to.

Now I know a lot of people would just say that its his responsibility because he did those things and that the problem is that he gave in to that shame and fear which granted his teaser those powers over him. True but at the same time there is the very real problem of people using these tactics for they are proof that people have their idea of what it is to be a man and they are willing to impose this image on men and boys in order to get what they want. And for those of us who don't dance the dance they want us to dance and dance it to their tune this can be very problematic.

Take my fingernails for instance 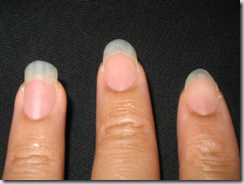 Yes that is a picture of my left hand about a month ago. Part of the male gender role is that we are supposed to be dirty and not care about things like taking care of our fingernails. That's for women in salons for 3 hours every two weeks right? So you can imagine the time I've had with the fact that I actually put some effort into taking care of them. Over the years I've had commentary ranging from, "Men aren't supposed to have long nails". to "Those are an instant hysterectomy. Cut 'em!" to "I'm gonna hold you down and cut them for you." and my personal favourite, "How are you supposed to get pussy with nails like that?"

So by simply not obeying one rule of manhood I'm effectively declared to be not a man. This is a big problem. For people to try to label my gender (and in some cases question my sexuality) based on a single act stinks of trying to get me to conform to their idea of what a man is supposed to be. And I can only imagine that it is only worse for men that go outside the norm even farther than I do. A lisp in the voice? The occasional dangling wrist? A fondness for skirts and makeup? Wearing an angel costume for Halloween? Having sex with men? The list goes on. Pushed out of the man camp and used as a target for ridicule, insults, and abuse in an effort to protect their precious image of what a man should be.