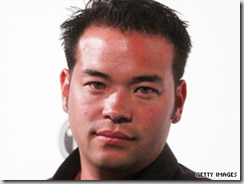 Since it became clear that Jon and and Kate Gosselin were experiencing marital troubles, the situation has been a hot mess.  The media initially took Jon’s side, painting Kate as a shrewish harpy incapable of experiencing happiness, unless she was ordering Jon around as though he were one of her sons instead of her husband.  Even though John engaged in what could clearly be determined as playboy behaviour after their separation, it was Kate that was lambasted by sexist attacks after she refused to pose for playboy.

Well it seems as though all of the playboy, man on the make behaviour has suddenly caught with Jon.  TLC announced that the show would be changed to Kate plus 8 and that Jon would appear in the occasional episode.  I saw that decision coming a mile away.  For this to work it has to be a family based show and if Jon is running around judging bikini contests, he hardly makes a positive representative of the ideal dad.  Ward Cleaver would be very disappointed Jon, very disappointed.  Jon could not take this news sitting down and much like a child screaming, I’m taking my ball and going home, he issued a cease and desist order through his lawyers. 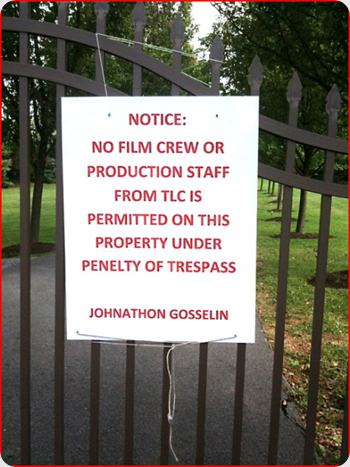 Jon was suddenly expressing concern that his children were being exploited.  Funny how these objections were not raised until he was dumped from the show.   Jon’s lawyer Mark Jay Heller, told the Insider, “Jon realized his family was like a trainwreck, so he decided to put the brakes on the divorce and on the show … because if he didn’t the family would be in a mortal accident … the victims of a trainwreck.”  Perhaps, Jon should have thought about all of that before he undid his zipper. His sudden concern is touching, though not in the least bit believable.  Year after year he seemed to have no problem allowing his children to be filmed while he scored freebies from companies.

TLC released the following statement in regard to Jon’s actions:

"We are aware of Jon Gosselin's recent statements, and remain deeply disappointed at his continued erratic behaviour. He and the family were shooting as recently as last Friday, without incident, and his latest comments are grossly inaccurate, without merit and are clearly opportunistic. Despite Jon Gosselin's repeated self destructive and unprofessional actions, he remains under an exclusive contract with TLC. Direct filming of the children has been currently suspended, pending further conversations between both parents."

Looks like super dad struck out.  It seems Jon believed that TLC would be forced to their knees to keep the kids on the air.  I guess he should have had a look at the ratings before he decided to play hard ball.  If he had not acted like an ass repeatedly since the announcement of the divorce, TLC would have had no reason to attempt to center the show around Kate.

Just like any other “reality” show on television, Jon & Kate was highly edited to produce a certain message and attract a specific viewer.  Even with all of that mind, people quickly chose sides the moment the impending divorce was announced.  It was not until the constant glare of the TLC cameras lifted that we got a semi-accurate view of either Jon or Kate.  As time has passed, Jon has revealed himself to be a self concerned child.

"I do the show for my family because I believe it provides us opportunities we wouldn't otherwise have," she said. "Jon used to share that belief until as recently as the day the network announced the name change of the show and indicated that Jon would have a lesser role in the show. It appears that Jon's priority is Jon and his interests. My priority remains our children and their well being."

As much as he seems to resent the fame that he has gained from the show;  it appears that he  craves the money and the status of D list celebrity.  Jon may believe that he is only using his constant media interviews as an opportunity to defend himself, however; those of us that are routinely subjected to his idiot babble see it as nothing more than a bid for an attention.  Any parent can recognize a temper tantrum when they see one.  Though he is still a fairly young man, it cannot be fun to have a mid life crises during a 24 hour news cycle.  Much of what he is currently experiencing is of his own creation.  I really do hope that he can finally start putting his children first.  TLC may use them for ratings but he is exploiting them for celebrity status and shiny baubles.