(Dear D skip to the next post, this is not for you)

Editors note: As a heterosexual woman I am writing this piece from this position.  I would appreciate the perspective of lesbian and or bi women in the comment section though. 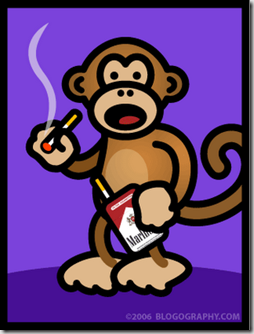 Okay, so the other night I was sleeping and I had the wildest dream.  I awoke, rolled over and told the unhusband that we needed to have some monkey sex…I won’t tell you his response.

But to be honest with your partner about what you want sexually, you first have to be honest with yourself.  For a woman, this can be an extremely loaded proposition.  For instance, do you like to be called names?  What if your thing is tons of dirty talk?  If a man calls you a slut or a whore as you are walking down the street and this makes you madder than hell, but in the act of fucking it makes you sopping wet, what is a good girl to do?

As much as we fantasize about wild and uninhibited sex, how many times do we take the easy way out for fear of rejection or because we understand that women are only supposed to approve of certain acts?  Feminists/Womanists will talk about the patriarchal world and the effects of male domination but does this limit our ability to appreciate a good dick?  Does it make you a colluding supporter of male hegemony, if giving head doesn’t make you instantly declare fellatio degrading? (well ya have power differentials to consider and all) What if making your partners eyes roll back in his head because you are giving him an awesome blow job is just your thing?

When we roll back the sheets, we don’t leave our assumptions and gender training behind, no matter how sexually evolved we claim to  be.  Some of the very things that turn us on, like having a man be an extremely sexually aggressive partner, are based in the fact that women are taught to be demure.  When a man grabs your ass and you moan; is it because it feels good or is there a part of you that wants to be figuratively taken?

What about a man that believes in slow wet kisses?  What if he likes sex long and soft?  Does that suddenly make him feminine because he believes in foreplay and delaying the moment of climax? There is a reason why performance anxiety exists.  Just as some women fear being seen as the aggressor least it be understood as an indicator of morality, some men fear not being able to live up to the hungry sexuality that is constructed as naturally male.

So there we lie, male and female, trapped by roles that have long since become normalized;  neither fully satisfied but both bound by the limitations of the gender binary.  Sex is not nearly as subconscious and instinctual as we construct it to be.  If nothing is outside of discourse, how could something as filled with moralizing and guilt like sex escape harmful construction?

It is important to know what you like sexually and why, because it will speak to a part of you that is oft ignored and forgotten. Your baser self is invisible in our ever day discourse because even as we have created these urges as a part of encoding gender with meaning, we have also learned to discipline them in such a way as to construct them as animal and uncouth.

Is anyone really having monkey sex when performing gender is the first and last lesson that we all learn?  This is not to say that we are not achieving arousal and orgasm but have we reached the point where we can unburden the mind (the most powerful sex organ), long enough to just enjoy what feels good without shame, regret, or self flagellating.  Perhaps, even though we consider ourselves to be evolved and civilized, we still have much to learn from animals.