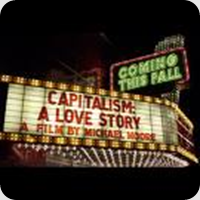 When the words “capitalism” and “socialism” appear in newspapers and magazines in the United States it’s a sure bet that we are in the midst of some sort of economic crisis. This crisis, as terrible as its impact is on the people of the world, has made a slight opening in the lasting McCarthyite cage surrounding dialogue about alternative economic systems or the faults in the current one.

Michael Moore’s new movie sports a title with that until-recently taboo word: capitalism. Going about as his pranksterish self, Moore attempts to illuminate the evils of a corrupt system, specifically the evils affecting the everyday, all-American family. Moore, being true to his style, focuses on specific instances to exemplify the larger picture.

One could say Moore takes the anti-“Kapital” approach to exposing capitalism’s flaws. Where Marx explained the inherent flaws of a self-defeating and evil, yet “perfect” version of capitalism, Moore focuses on the specific instances of failure that plague a corrupted version of capitalism.

Moore interviews a woman whose spouse’s death put thousands of dollars in the pocket of his employer through “dead peasant” life insurance. He talks to a family as they clean their own foreclosed home for the very bank that is kicking them out, burning furniture they cannot take with them. He exposes corruption on the highest and lowest levels, from President Ronald Reagan to small town judges.

Moore’s explanation for this corruption and greed, however, places the blame on a series of sleazy politicians and CEO’s, on policies that deregulated banks and investing, on the New York Stock Exchange, and on just about everything but the very core values of an inherently evil and self-defeating capitalist system.

His solution, he says, is democracy. However, the movie contains a more specific solution than he openly expresses. It centers on fixing a wayward version of capitalism by way of reform.

Moore’s interviews with priests, who perhaps most accurately explain the “immoral, obscene, outrageous” nature of capitalism, are followed by praises for the New Deal and President Franklin Roosevelt’s dream of a better society.

Moore tapes off the banks as crime scenes but doesn’t get very close to the CEOs on Wall Street when he tries to make a citizen’s arrest.

Many critics, and Moore himself, champion “Capitalism: A Love Story” as the final, logical culmination of Moore’s previous movies. From “Roger & Me” to “Sicko,” Moore brought brutal truths, all of which stem from a capitalist system, to a very broad and comparatively apolitical audience.

Despite his remarkable achievements, Moore’s latest film fails to really expose the root of the issues his previous movies covered; there is no thorough explanation about the flawed assumptions of “rational maximizing beings,” perfect markets, or the need for constant expansion that truly rotate the wheels of brutal capitalism, and there is no focus on any of the imperialist invasions from that of North America to Vietnam that were sponsored by capitalism.

Moore’s film, in part due to the timing, and in part due to his small scope style, feels more like a movie about Wall Street, AIG or foreclosures than about capitalism. It is perhaps the logical next step for Moore to begin questioning the overriding system through the context of the current economic crises, but “Capitalism” is far from a culmination. It makes one wonder how the film, begun before last September, would have turned out if the economy had not collapsed.

To be sure, and to be fair, this movie will inspire people to think more critically about the economic system that has come to eclipse democracy in this country and around the world. This movie will inspire investigation and doubt. Perhaps Moore’s avoidance of capitalist fundamentals was conscious, because he believes the U.S. is not ready for revolution, or because he believes in reform. Perhaps it was unconscious. Either way, his comical and informative movie was entertaining and educational, even if its title is misleading.

Smith is an activist in the youth group FIST—Fight Imperialism, Stand Together.