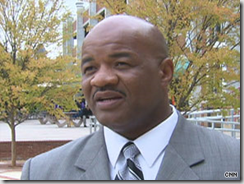 We have invested a lot into the male/ female binary and many feel threatened when the line is even slightly blurred. As part of its appropriate attire policy, Morehouse has banned wearing of women's clothes, makeup, high heels and purses.  It seems that Morehouse men are expected to send a very specific message to the world about what exactly Black masculinity entails.

According to CNN, Dr. William Bynum, vice president for Student Services stated the following when questioned about the policy:

"We are talking about five students who are living a gay lifestyle that is leading them to dress a way we do not expect in Morehouse men," he said.

Apparently, before this decision was made final there were discussions with Safe Space, the campus' gay organization.  Of the 27 individuals in the room, according to Dr. Bynum, only three were against this dress code. I can see how Dr.Bynum got the idea that there should be a vote on civil rights considering the recent disaster of Prop 8 but the lesson that we ALL should have learned, is that civil rights are not something the larger society should be able to dictate.  If this is to be the case in all circumstances, then we would all live under the tyranny of the majority.  I doubt if civil rights were put to a vote during the 60’s the African American community would have achieved the success that it did.

It took a supreme court decision to desegregate education and one can be certain that had this decision been held up to a vote at the time, that no such radical change would have occurred.  The majority will always vote in favour of their best interests to protect undeserved privilege and therefore, it is impossible to create true equality under these circumstances.

Even putting this to a vote, is an example of the privilege in which the Morehouse administrators live.   You will note that Dr. Bynum had the nerve to use the phrase the “gay lifestyle”, exemplifying his heterosexual privilege.  Being gay is not something someone chooses and this very basic fact seems to have escaped him.

At the heart of this issue is the perception of Black masculinity.  Whiteness has gone to great lengths to ensure that Black men are not considered valuable.  We are not far from the days when a grown man could be called boy.  Black men fear feminization because they view it as reductive.  This is further problematic because this means that femininity in and of itself is not understood as the equal of masculinity.  In this story we can see the combination of homophobia, racism and misogyny.

The administration of Morehouse is simply copying what it has come to learn is a successful path to power. To be counted in this society, one must be able to utilize power coercively and this is the path that they have chosen to realize their masculinity.  These are educated men, who are well aware of how such behaviour has historically hurt Black men and to perpetuate this with a dress code, only reinforces power structures that maintain isms.

Rejecting those that are gay or non-gender conforming is not going to increase the social power of these heterosexual, cisgendered Black males.  This action will cause fracture rather than unity and this must be understood.  You cannot discipline Blackness and there is no acceptable way to be Black.  The GLBT community is as much a part of the Black community, as any other grouping of people.  Their sexual orientation does not make them any less Black and a failure to embrace them is to limit the beauty and capacity for growth and radical social change that is imperative for equal rights for ALL people.  I understand the drive behind this decision, however I simply cannot condone it.