My GLBT Brothers and Sisters are My Family

First, it must be stated that the sexuality of POC has been used against us as a weapon.  Black women have been understood to be hypersexual jezebels, constantly in search of the next available penis.  Black men have either been understood as thug rapists, or as highly effeminate.  In each instance this has been to promote White supremacy.  POC are not allowed to experience their sexuality as naturally occurring, rather it exists simply to satisfy the needs of others or to promote our bodies as a continual threat to Whiteness.

Due to the White leadership of the mainstream GLBT community, many have refused to accept and or embrace our same gender loving members.  Homosexuality is not a White thing; it is not a perversion of bodies of color.  Many believe that by rejecting homosexuality that they are rejecting Whiteness, when indeed what they are truly rejecting is our OWN PEOPLE. 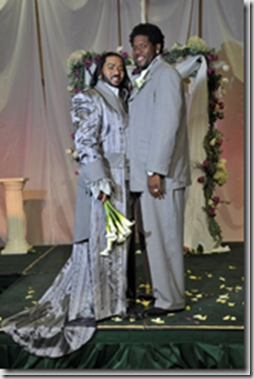 The marriage of Michael and Jamil set of quite the firestorm in the Black community.  A Morehouse College administrative assistant Sandra Bradley sent the following e-mail.

"I can't believe this wedding. It's 2 men. They don't smile in a lot of pictures and they look like a few brothers I've seen in the streets looking STRAGHT. Black women can't get a break, either our men want another man, a white woman (or other nationality that's light with straight hair), they are locked up in jail or have a "use to be" fatal disease. I'm beginning to believe Eve was a black woman and we Black women are paying for all the world's sins through her actions (eating the apple)."

Some may view this e-mail as simply a commentary regarding the difficulty of young professional Black women to find a successful Black mate and others see homophobia.  It certainly cannot be denied that Black women are likely to remain unmarried or will partner below their class level.  This has to do with the ways in which Black femininity has universally been devalued.

The sexuality of Michael and Jamil has nothing to do with the supposed drought of eligible men.   It would seem to me to be a very basic fact – Gay men are not attracted to women and any coupling with them would be unsuccessful based on this one simple truth.  To belittle them, or question their masculinity is to misplace anger.

When AIDS first became a serious threat many in the Black community, so many refused to speak out and claimed it was the price for engaging in “lifestyles” that were either patterned on White behaviour, or displeasing to God.  The very same people who express rage at the genocide that occurred during the middle passage, easily ignored the deaths of thousands.  These people had much to contribute to our community and now their voices have been silenced forever, without even a murmur of regret.

Whether someone is same gender loving or trans they are still Black.  Their color did not disappear because they chose to live their lives not hiding who they are.  We speak about the Black community but what community exists when we deny the happiness and well being of our members? Same gender loving people marched alongside Dr.King for our rights.  Same gender loving people are subjected to racism and hatred just as any other person of color.  They did not give up their race because they decided to be true to who they are.

When I read commentary like the above I wonder who they think wins when we decide that the same gender loving people in our community do not deserve to be embraced.  In fighting and divisiveness serves Whiteness. We must speak with a unified voice to demand equality and by choosing to silence those in our community that make us uncomfortable due to undeserved privilege, we are supporting the very same system that keeps us all  understood as secondary citizens.  You cannot claim to love Blackness or Black people, if you do not love openly all of its manifestations.