If you are on Twitter and following me or any one of the many breastfeeding advocates, you probably noticed us tweeting with the hash tag #nestlefamily. If you’re not up to speed, I’ll try to break it down succinctly. Many large corporations, like General Mills and Hallmark, have begun inviting high-traffic bloggers (often so-called “mommy bloggers”) to their corporate headquarters on all-expense paid trips. In return for food, lodging and airfare, these bloggers give the company their opinions on its products. The company then uses this information for marketing & PR purposes. At the end of the day, the company is trying to make money. Focus groups are nothing new, but with women, particularly mothers, making the majority of the buying decisions for their families and social media becoming a more important, effective (and cheap!) marketing tool, it’s a safe bet that these types of trips will be offered more and more frequently.

Nestle recently planned one of these trips for about 20 bloggers*, a list of whom you can find here. The event is currently taking place in California, but for weeks, attendees have been tweeting with the #nestlefamily hash tag on Twitter. I first got wind of this event when someone I follow on Twitter used the hash tag and I decided to search it and investigate further. I found that a woman who I thought of as a breastfeeding advocate was attending the event. Her name is Jennifer James and she is the woman behind The Black Breastfeeding blog (now defunct), Mom Bloggers Club, and the historical breastfeeding blog on Mothering magazine’s website. When I asked her why she would ever align herself with this company and attend their blogger junket, her response was that she never said she had a problem with Nestle. Maybe so, but I think she should have a problem with Nestle.

Nestle has long been thought of as one of the most corrupt corporations in the world. They are a huge multinational and have their hands in almost every aspect of the food business. They produce and export many of the “ethnic”and international products you probably eat or grew up eating. They own the largest share of the infant f*ormula business. They recently acquired the Gerber brand. They sell bottled water. They make candy. At Thanksgiving, you probably make your pie with their canned pumpkin. On a diet? You’ve probably stocked up on their low-calorie frozen meals. They are blatant WHO Code violators and aggressively market their infant f*ormula in developing nations. They used to send sales reps to developing nations in white uniforms and call them “milk nurses.” 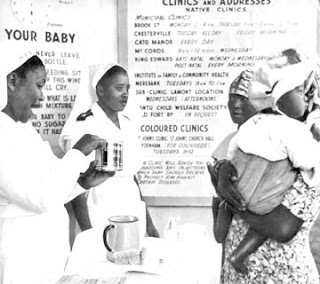 These reps would convince mothers to use f*ormula instead of breastfeed and would provide them with freebies just long enough, until their milk ran out. So now you have a woman who is impoverished with a hungry baby and no breast milk. This led to watering down of f*ormula (which still happens to this day, right here in America). These women often didn’t have access to clean water so they couldn’t sterilize their baby’s bottles or nipples and had to mix the powder with contaminated water.

Besides their unethical formula marketing, they have also been accused of using child slave labour in the Ivory Coast to make their chocolate. In 2000, the BBC produced a documentary on children who were stolen from their families and forced to work on cacao plantations where Nestle buys their cocoa. The children were often starved and beaten, and some claim those who tried to runaway were murdered. Then there’s Nestle’s stake in the water business, where they sell local communities’ water at a huge profit, while people who live in the area end up paying through the nose for their own local water.

There has been a lot of condemnation of Nestle in the blogosphere lately and many people are learning things about Nestle they never knew. Many have decided to boycott the company, which I applaud. The conversation about Nestle has been great, but one thing missing from all of the discussions is the racism implicit in many of Nestle’s business practices.

I’ve been told by mom bloggers that it doesn’t matter if people are dying because of Nestle and their products, because it’s only people in Ethiopia. And those enslaved children making the chocolate Nestle buys? Don’t care about them, because Crunch bars are delicious! Nestle pulls shit in the developing world that they would never dream of doing in Europe or the Americas (unless it’s targeting Hispanic moms: in 2004, they marketed their formula heavily in Los Angeles & Houston, specifically in Spanish-language magazines and radio.) They market their f*rmula as protecting against diarrhea in Africa, when studies show formula-fed children are 25% more likely to die from diarrhea than breastfed infants. They also sell a cereal there as a complementary food for infants that contains honey, when we all know honey should not be given to children under the age of 1. In Laos, they use the same logo on their f*rmula as they do on their coffee creamer. Since there is such a high illiteracy rate in Laos, paediatricians discovered parents were often mixing up the two products when they found babies were suffering from protein malnutrition. You can even see the racism in their subsidiaries, like L’Oreal, which was found guilty of racial discrimination by France’s highest court in June. Do a search in Google for Nestle’s marketing practices and you’ll find again and again how they specifically target poor people of color and that these practices result in sickness and death. I will state it unequivocally: Nestle is a racist company.

It’s easy for Nestle to prey on these black and brown people, people who are impoverished, oppressed and often uneducated. It’s bad enough to aggressively market f*rmula to women who have the resources to make a relatively informed decision and have access to clean water. But what kind of company targets the most vulnerable, the easiest to manipulate because of fear and ignorance?

So what of the women of color who chose to participate in this blogger junket? Although it may not be fair, I’m even more disappointed in them than the rest. With all of Nestle’s infractions in Africa presented to them, they choose instead to believe Nestle’s PR team and tweet about how great it is that Nestle has water wells in Africa and built a whopping THREE homes there for poor people. Well, shit, it’s the least they could do, but it still doesn’t absolve them from all of their piss poor practices around the world. As a Latina, does it not bother you that they created a campaign just for Hispanic women, thrilled because the population boom in your community means big bucks for them? As a black woman, do you really have no regard for women in Africa burying their babies because they can't afford to feed them? That their babies will die and they will still choose to feed the next one Nan because Nestle says it's better? Maybe you don't believe Nestle is racist, but just greedy. But does that make it any better? 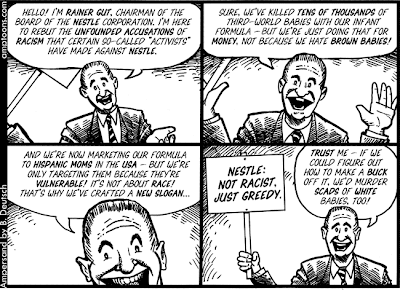 *It’s important to note that many more bloggers were invited and turned down the invitation because they didn’t want to be associated with Nestle. I commend those bloggers on taking the time to research the company before accepting a free trip from them and taking their money.

Update: People are questioning the validity of my claim that there were racist remarks on Twitter aimed at the activists trying to educate people about Nestle. Please see this post for coverage of the racist things being said by mom bloggers.