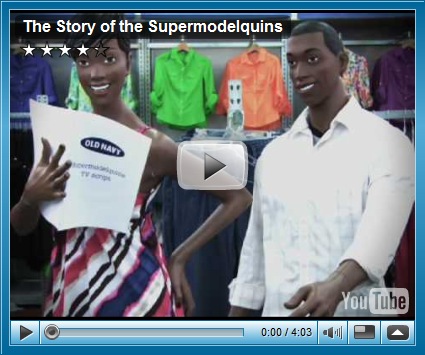 this is the “true hollywood” -style background story to the newest old navy ad campaign known as “the supermodelquins.”

The most recent instalment in this campaign playing in my neck of the woods features a “model” hawking sweater-coats who gets separated from her legs at the airport.  HER LEGS.  WTF?  seriously, watch the whole series if you have the time.  These commercials offend nearly every vulnerable population there is.  Starving actors, the unemployed, women, POC, and the disabled are the ones I noticed first, although perhaps not in that order. More videos are embedded below.

First, as the economy continues to suffer and more and more jobs are lost, it bothers me that yet another franchise has taken to using non-actors to fill roles in their money-making schemes, also known as television shows, and commercials.  While this may be at the very bottom of anyone's particular list, the failing economy has rocked my own corner of the universe.  for reals.  and while I am not an actor, I can certainly empathize with professional actors that have been hip-chucked out of their industry and left unable to earn a wage, and had their medical benefits lapse, due to long-term unemployment.  (the screen actors guild (SAG) has been quantifying the harm that reality-television has caused working actors since at least 2005.)

This newest old navy campaign has made living, breathing human beings obsolete, (at least in front of the camera) and i think most everyone would agree that particularly in these times, that decision was unethical.  Not to mention hypocritical, where old navy is relying on the disposable incomes of its customers to make its own living, but they aren't giving anything back.  In fact, where reality franchises have replaced union workers with non-union ones, saving themselves the money and hassle (also known as ethics and regulatory oversight) of having to deal with SAG, old navy’s decision to forgo the human element altogether seems particularly self-serving, and cruel.

Most obviously, while the beauty standard for any actor to appear in a television ad is all but unachievable for a real person, mannequins seem to accomplish the task effortlessly.  But that's because they aren't people.  Sure, old navys clothes are going to hang just right on them:  they have no lumps, no superfluous bumps, and no premenstrual bloating.  Similarly to the Barbie franchise, making girls and women believe for decades that the perfectly-proportioned body would be one that would make a real woman keel over from top-heaviness, one cannot help but wonder what young girls and tween-girls are thinking when they see these images.  Whatever it is, its not based in reality, and real girls will literally never measure up.  and that cannot be good.

Unfortunately, unachievable beauty-standards may be the least of the problems with this newest campaign.  Here's another ad in this series that's particularly troubling, called “the midtown flash“. 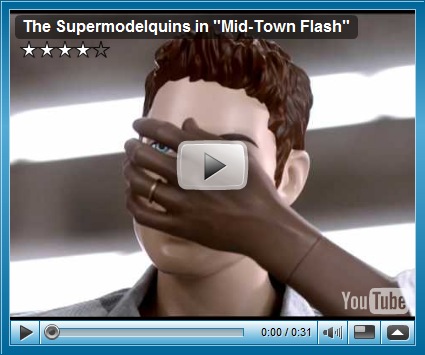 Here, we have a black female mannequin, that has all the same problems as the others (as in, she's not real, is taking work away from human actors etc).  But this unfortunate woman suffers the additional humiliation of literally being stripped naked in the middle of a public place.  WTF?  Contributor tolu olorunda breaks it down well in his piece in the daily voice, “is the new old navy commercial racist?”  notably, the author also criticises the highly sexualized nature of the racism here, but fails to fully grasp the intersection of misogyny and racism that has clearly occurred:

Through mediums like commercial hip hop, and the venues which promote it, African American women are prostituted as eye-candies and video-vixens, and exhibited as attractions, meant for the delight of a majority white audience–commercial Hip-Hop’s dominant patrons.

To address what this author has missed…it will surely be a cold day in hell before old navy’s marketing department decides to show the full-frontal nudity of a white woman or a man of any race, in any of its ads, ever.  Failing that, it would almost certainly be another woman, of whatever race, not a man, that's next in line to be publically stripped.  in other words:  don't worry, dude.  The black guy is probably safe.

And it’s telling, isn't it, that the black “man” took action not to cover the now-naked body of his wife…but went to great pains (without moveable joints) to cover the eyes of the white male gaze–while everyone else, including her own child, could still see her.  Clearly, the humiliation/victimization that was occurring between the men was of primary importance, as if her husband’s right to not be embarrassed, and his right to not have his property violated by another man’s gaze were more important than the woman’s own victimization, or anyone’s bothering to cover her up, or her covering herself.

To that point, was her own failure to act here due to the fact that she, as a plastic figure, had no agency?  Or are we supposed to believe that she enjoyed what was happening to her?  troublingly, but necessarily to the “fun” tone of the ad, the black woman seems complicit in her own humiliation when she asks “what, like you’ve never seen plastic before?” (if it was “just plastic”, why was it only the black, female plastic that was revealed?)  and as is always the case when considering images in commercials or television, it was surely a bunch of wealthy men, probably also white, who created these images and storylines to begin with.  How and why they made the decisions that they made, particularly regarding who was stripped; the presence of the (white) male gaze; and the agency and attitudes of the black couple, since this storyline revolved around them, are questions that need asking. 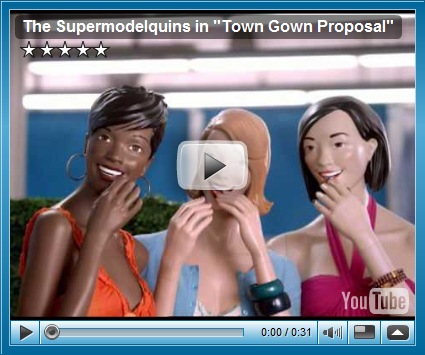 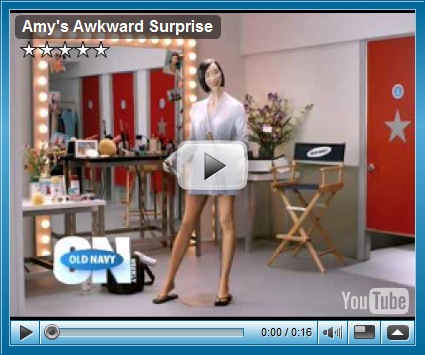 All these ads are troubling because of the way they address the human element: there isn't one, but that's almost beside the point.  It’s disquieting that these mannequin-bodies are so obviously expendable.  Their parts are quite literally interchangeable.  And they are frequently broken, and then separated, and reunited with their own parts (or someone else's).  Nip/Tuck anyone?  (I am reminded here of the very misogynist TV show, as well as the surgical procedure).  One even has brown legs and a white torso, while two more have been severed at the waist.

I was particularly troubled with the “love story” aspect of the first video, between “Kelly” and “Josh.”  as Josh recalls, when they first met, Kelly was “being wheeled by.”  Huh?  With the actors’ pained and ineffectual movements, and their stiff and broken bodies, it almost plays as an insensitive disability-storyline, except of course that the characters are all disabled (or none of them are) and most of the time when someone needs to be “wheeled” anywhere, as opposed to wheeling themselves, that person is in a coma, or otherwise incapacitated and unable to give consent.  problematically, it’s this “meeting” that starts the Kelly-Josh love-affair, after which the two become “inseparable.” Next, their romance is documented by someone taking pictures of them against different backgrounds, as if they had traveled together, because that's what mannequins do.  Without any agency, they are there for the consumption of the viewer.  But the characterization of a picture-taking campaign done for another’s consumption as a “romance” in which the actors actually and consensually participate reminds me of something.  Porn?  I know that might be a stretch…but so is old navy’s premise with these ads.

In the end, as we all live within a corporate and consumer culture that creates our desires and appropriates our cash, we all have to ask ourselves, “what are the effects on the rest of us?”  old navy’s marketing department aren't idiots, and they likely have every reason to believe that their newest advertising campaign will cause their sales to increase, or they wouldn't have done it.  But while this corporate giant is making a profit by utilizing offensive images, the rest of us are left to shoulder the burden of having been exploited.  We have allowed offensive racist, misogynist, and ableist imagery into our homes, and there will be consequences to that (how could there not be?)

And not as if this even really matters, but has anyone even been into old navy lately?  Their clothes are getting more cheaply made, just as the stores are getting dirtier.  And those town-gowns would make even a stick-figure look pregnant.  sadly, if old navy ends up crossing any line easily observable to the mainstream, it will be that one:  their products suck, and shopping there isn't “fun.”  for the record, neither are these ads.