Poor Rush Limbaugh is a Victim of Reverse Racism 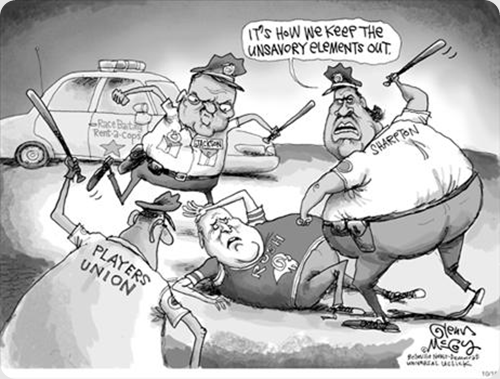 The above image is from Townhall.com a  masabatory conservative site.   Certainly Limbaugh’s own words were not behind the fact that he was not welcome to participate in the NFL as a minority owner of the St. Louis Rams.  It was a cruel left wing conspiracy that left him out in the cold.

It’s funny that Limbaugh and his cohorts could even for one moment present him as the victim of racism.  You will note in the above image the "Race-Baiting Rent-A-Cops" are the reverend Al Sharpton and Jessie Jackson Sr.  Sharpton and Jackson speak truth to power when they fight for the equality of African Americans and this is what makes them so reviled by Whiteness.  Men like Limbaugh do not want to be called out on their actions.  Whiteness is supposed to be above question and when POC dare to speak, it is considered an affront.

The fact that Sharpton and Jackson are depicted as police inflicting violence on Limbaugh is particularly upsetting.  We know that the justice system in particular is part of the White supremacist state.  Countless Black men have lost their lives due to racism within the system and that certainly cannot be said of White men.  This cartoon is an affront to men like Oscar Grimes and Sean Bell.

No matter how much of a martyr Limbaugh would like to construct himself as being, his heart would not skip a beat if he had to interact with the police because he can count on his race, class, and gender, to speak for him.  Such is not the case for a Black man, as Skip Gates quickly found out.  When he revealed his drug addiction, he knew that he could count on the Whiteness of his skin to shield him in ways that would never occur for a person of color.

No matter how many angry cartoons the right decides to draw, Limbaugh is not a victim of reverse racism.  The term reverse racism is indeed an oxymoron because no such thing exists.  Blacks do not exist with the institutional power to be racist and this is especially so in the case of Rush Limbaugh.  This man has built a career promoting undeserved White privilege and now he has the nerve to want to own the label of martyr and victim.  Really can there be a more ridiculous supposition currently in the news?