For the masses of workers and oppressed people in this country—those whose days are consumed with trying to survive and feed their families, keep a roof over their heads and get some kind of minimal health care or education—for the majority, that is, who grab their news in quick gulps on TV or radio, Web sites or tabloid newspapers, Oct. 16 was just another day. 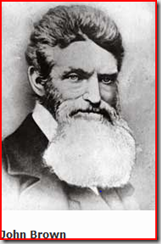 They never heard a word about its import. That’s not surprising, but it is a damn shame, for Oct. 16 is one of the most important dates in U.S. history. And this year was the 150th anniversary of the vitally significant event that happened on that date.

That event is the raid on the U.S. Army arsenal at Harper’s Ferry, Va. This military assault by an armed, well-trained, united band of Black and white militants was intended to be the opening battle in what would then develop into a widespread guerrilla war that would topple the system of chattel slavery.

The troop had written, hashed out and agreed upon a revised, improved Constitution guaranteeing race and sex equality. It was to be a new charter for the new country they envisioned rising out of the ashes of the old one that had been built on the backs of enslaved Africans and wholesale theft of Indigenous lands.  With this Constitution in hand, with a pledge to succeed or die, with almost unimaginable courage, 23 people went to Harper’s Ferry on Oct. 16, 1859, to take on the slaveocracy.

Their leader was John Brown. He was known as “Captain Brown” or “Old Osawatomie” because of his heroic exploits three years earlier, in 1856 in Kansas, where he and his troops waged a series of victorious battles that proved decisive in bringing Kansas into the Union as a free rather than a slave state. Brown’s tactical brilliance; his unwavering spirit and optimism even in the face of the death of one of his sons and disabling of another; an utter absence of the racism that tainted most of the prominent white abolitionists; and, above all, his bone-deep commitment to the cause to which he devoted his entire life—all this led the group that assembled to plan and carry out the raid on Harper’s Ferry to determine that Brown must lead the charge.

The plan of attack was crafted based on Brown’s long years of study of the tactics of Nat Turner, Denmark Vesey and other enslaved African-American leaders of U.S.  slave revolts; of the Seminole nation that had resisted domination by colonial settlers; of the Maroons of the South and of Jamaica and Surinam, escaped slaves who fought the settler state forces in daring raids from bases in the hills and mountains; and of Toussaint L’Ouverture, one of the great liberators of Haiti.

In Brown’s view, there were several African-American members of the Harper’s Ferry troop any one of whom ought to take the leadership post for the action. However, the group overruled him, arguing that because of his experience in Kansas and his proven military prowess, it was Brown who must captain their squad.

And so this small band of warriors moved in. They were self-trained. They carried a minimal cache of smuggled weapons. The idea was to seize the arsenal, distribute its contents to the nearby population of enslaved laborers, join with them to liberate the region, establish a base of operations in the woods which would swiftly expand to many bases as ever more freed slaves joined up, and wage full-scale war until the abomination of slavery was defeated for good and the new liberationist Constitution was instituted.

The initial steps of the plan went well.  Brown and his troop had the element of surprise on their side. They easily overwhelmed the arsenal’s defenses, took hostages and occupied the site. After these early achievements, however, there was a series of setbacks. The government, initially caught off guard, were able to rally. Ultimately, through sheer strength of numbers and with all the armed might of the state behind it, the Army—under the command of none other than Robert E. Lee, who only a few short months later would take the helm of the secessionist Confederate forces—beat back the brave band of anti-racist heroes.

Commentary from bourgeois historians and military analysts fixes on various faults in the planning and execution of the raid on Harper’s Ferry to explain why it did not succeed.  Most of it blames Brown, tagging him as some variation of insane, a crazed terrorist or the like. This slander against one of the towering figures in the history of the struggle against racism is clearly politically motivated. Even now, 150 years later, racism is so integral, so crucial to the capitalist enterprise, that it is vital to portray the willingness of this white warrior to give his life in the effort to end it as sheer madness.

A truer image of Brown can be gleaned from the words of Frederick Douglass, W.E.B. DuBois and Malcolm X, all of whom praised him. Or from his comrade and collaborator, the great Harriet Tubman, who years later said he had been her “dearest friend.”

Factual inaccuracies also riddle the standard version. African-American journalist and political prisoner Mumia Abu-Jamal offers an example in his essay “The Neglected Voices from Harper’s Ferry” in a recent edition of “A Voice from Harper’s Ferry” by Osborne P. Anderson. Anderson was the only Black participant in the assault on the arsenal who escaped and survived; so his account, Abu-Jamal points out, ought to be regarded as definitive.  Anderson’s account contradicts those who claim that, before they arrived at Harper’s Ferry, the troop’s attempts to rally support among slaves on nearby plantations were unsuccessful. On the contrary, Abu-Jamal points out, “Anderson was in a perfect position to speak to the issue of slave betrayal. Instead, he sees none. He found the slaves supportive and overjoyed by the revolt, and counts them among the first to fall during the armed conflict. He was among the contingent that visited the plantations, where he found ‘the greatest enthusiasm.’ ” Abu-Jamal continues, “Of the 17 revolutionaries who died at Harper’s Ferry, nine were Black men!” This number includes not only those who had trained and arrived together, but several who must have joined the troop when it swept through the plantations along the route.  In all, “The majority of men who died at the Ferry were Black men; the majority of Black men who fought and died (five of nine) were slaves fighting for their freedom!”

Seven other freedom fighters, including John Brown, were captured. All were hanged before the end of the year. Worldwide outrage and mourning followed.

From Haiti to France to Cuba to Canada, in Detroit, Boston, Chicago and many other U.S. cities, bells tolled, orators spoke, and thou sands upon thousands rallied, marched and cried out in fury at the injustice.

In his jail cell, just before he was led to the gallows on Dec. 2, 1859, the great soldier for human liberation wrote these last words: “I John Brown am now quite certain that the crimes of this guilty land will never be purged away but with blood.” Indeed, the Civil War began just a year and a half later in April 1861.

As Union troops marched into battle, they sang the newly penned “Battle Hymn of the Republic” with its famous opening words: “John Brown’s body lies a-moldering in its grave but his spirit marches on.” The war had really begun on Oct. 16, 1859. That was the day of the first battle, when a small troop of Black and white guerrilla fighters took up arms against the slave state.

By any honest measure, the raid on Harper’s Ferry was a success. It was a clarion call for freedom, and it echoes down the years.