Stephen Harper Gets By With A Little Help From His Friends 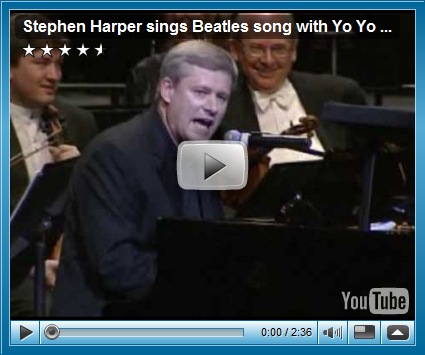 According to CBC, Prime Minister Stephen Harper performed at a National Arts Centre Gala in Ottawa on Saturday night.  His performance has caused uproar in the artistic community given his previous commentary on the arts.

"I think when ordinary working people come home, turn on the TV and see … a bunch of people … at a rich gala, all subsidized by taxpayers, claiming their subsidies aren't high enough when they know those subsidies have actually gone up, I'm not sure that's something that resonates with ordinary people," Harper said then.

Well some may see the hypocrisy of his actions or even the convenient attempt to soften his image with the threat of a no confidence vote, however; I believe what we should consider is his song choice.

Does anyone else see the social aspect of the song that Harper chose to sing?  I find this an interesting choice considering that conservatism is not about building social relationships but preserving undeserved privilege.  The only “friends” that Harper is interested in “getting by with,” are those that look exactly like him, and possess the same economic privileges.

Harper does not support the arts and this is not because he sees it as a fiscal waste or an affront to struggling Canadians, but because good art challenges the status quo and causes us to consider our way of thinking.  You cannot have a nation of automatons encouraged to think for themselves and question their government. Two people may look at the same painting and have a completely different understanding of the image they are viewing.  Art speaks to us on an individual level; it certainly is not about maintaining or upholding social mores.

A daresay no Beetle would be in approval of a Harper government.  Each of them were or in case of Macartney are, politically progressive in their leanings.  No matter how many ivorys Harper chooses to tickle, it is deceptive even in jest to use the music of a group that is the antithesis of everything he represents.  Singing with Yo Yo Ma does not make Harper more approachable or even relatable it simply makes him look like what he is – a desperate conservative once again lying to the public about his intentions. A leopard does not change his spots.

Renee
Niagara Falls, Ontario, Canada
I am the mother of two darling little boys that fill my life with hope. They have inspired me to help raise awareness of the issues that plague this little blue planet. If you are looking for a blog that is all about how wonderful and rosy this world is, turn right because this space will not be for you. I am a committed humanist. I believe in the value of people over commodities. I believe in the human right to food, clothing, shelter, and education. I am pacifist, anti-racist, WOC. My truth may not be your truth, but I intend to speak it nonetheless. Please feel free to direct questions or commentary womanistmus[email protected]