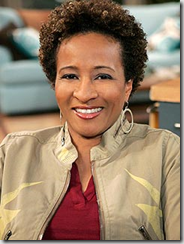 Wanda is everywhere you turn these days.  Whether she’s doing specials on HBO or chatting with Oprah, she has something to say about everything.  In an effort to create a buzz about her new late night show, she is doing the rounds.  I certainly wish her luck.  It has been a very long time since Black people had a voice outside of the dog pound (yep, Aresenio reference)

When Sykes came out as a lesbian in an effort to fight Prop 8, her commentary was very telling about the ways in which sexuality is assumed.  “I never had to tell my parents I was Black, but I had to tell them that I am a lesbian.”  Since that time, she has gone on to declare her sexuality as her largest marginaliszation.  As a matter of course, I tend to avoid critiquing someone’s lived experience but this…this is just pure ish.  Thanks Wanda for supporting a hierarchy of oppressions.  Are you going to get a gay is the new Black tattoo as well?  Will it help you to fight the last great civil rights battle on the planet?

So, I have some issues with Wanda…then it happens.  The publicity release that this outspoken, intelligent Black woman is now a mother of two.   So, I take a moment to celebrate and be happy.  As a mother I know what a blessing a child is.  This little person enters your life and is completely dependent on you for survival and as a reward for your loving attention,  they change your life and even your view on the world.  Is there anything more soothing than holding a sleeping child?

Since Wanda’s life partner is a woman they used a sperm donor.  Today the twins are six months old, without a drop of African American blood flowing through their veins.  When asked if she was concerned that the children would not look like her, Wanda’s response was “we’re lesbians we’re not fooling anybody”.  Even if they had used the sperm from a Black man, if he did not have a genetic link to her, there was never any possibility that they would look like her.

Somehow, I cannot take comfort in that as the reason why it should not matter that a Black celebrity willingly chose to avoid parenting a Black child.  It seems that unless Black children can be used as accessories to let the world know about your commitment to fauxgressive policies, they have no value.  Black children languish in the system but this did not stop DeMarcus Ware and his wife Taniqua from adopting a White girl.   What better way is there to announce to the world that you have moved on up than raising a Black child. 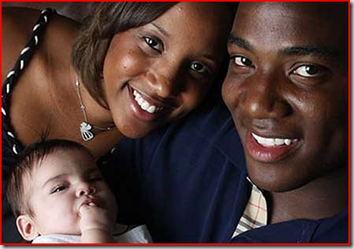 Then of course you have Michael Jackson and his three White children.  He may have claimed to be a proud African American man but everything he did proved the opposite.

We could wrap ourselves in some happy happy joy joy, with the belief that a child is a child but let’s just deal in a bit of reality for a moment;  children are not more equal than any other group of people on the planet.  When famous Black people are either having White babies or adopting them, it speaks to an internalization of racism.  Yes I said it.   How much more of our energies are we going to direct to supporting and glorifying Whiteness, while ignoring the plight of our people?

Sykes, Jackson and DeMarcus made a conscious choice not to love a Black child and in the process turned their backs on the child within themselves. We don’t live in a rainbow coloured world, where race has ceased to matter.  The decisions we make speak loudly about our comfort level and acceptance of ourselves. As a visible Black celebrity you are held to a higher standard. If you profess to love our people, then your actions need to back up your words.

From a very early age Black children learn that they are not as special as little White children, no matter the energies their parents devote to building a positive self esteem.  The same people that pinched my boys cheek when he was an infant, now follow him around their store waiting for him to steal and he is only eight years old.

A pregnant Black woman learns as her belly reveals her condition that rather than marvelling at the display of life, many are worried that she is brining another hip hop dancing, rap video making, thug into this world.  That is exactly what Black children are to Whiteness, potential rapists, drug dealers, thieves, entertainers, or sports stars.  The world does not look at Black children as though they possess the possibility of changing the world.

Investing in Black children is investing in the future of Black people.  When you move in celebrity circles it may seem as though your class position has transcended race, but as Toni Morrison said in her famous 60 minutes interview, “if you have White friends you should be aware of their limitations”.  Never be surprised if in the case of emergency, it is you that is thrown under the bus.

Thanks Sykes, Jackson and DeMarcus for wearing the sell out hat.  When little Black children wonder why it is that they continue to struggle so hard, they need look no further than your decision to avoid supporting them, to know why Whiteness continues to send them on the path to destruction.  If we don’t care about our babies, how the hell can we expect anyone else to?