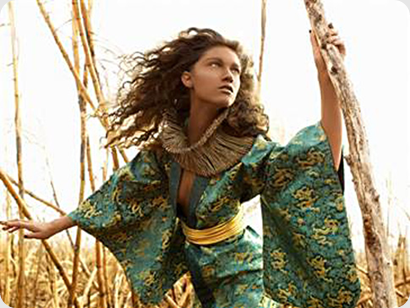 In a post racial world, Black Face would be a thing of the past.  Activists have just finished protesting Hey Hey It’s Saturday Night, an Australian show that decided to feature Black Face performers.  Their defence was that Australia did not have the same negative cultural history with Black face as Americans.  This offence was quickly followed up by Black face in French Vogue.  It would be nice to believe that African Americans would not contribute to this clearly racist portrayal of Blacks but then again we do have Tyra Banks to consider.

Seriously, BLACK FACE.  The shows producers have yet to comment on this segment.  On some level they must realize that this is indefensible and yet they filmed it, edited and aired it.  It would be easy to blame solely blame Banks for this but like any other program on television this is a team effort.  Tyra, just as all of the the producers of ANTM have been steeped in a racist culture from birth.

To be fair, Blackness was not the only racial category imitated.  What is most irksome about these representations is the idea that anyone at anytime has the right take on the characteristics of another for the purposes of entertainment.  If a Black model is needed, a Black model should be used.  No one wants to take on the negative stereotypes that have attached themselves to marginalized bodies.  As much as White women are allies to Black women, they don’t want to known as angry, sluts, who are masculine.  Blackness is not something you take on for a few hours or a day; it represents a life.

Tyra knows how hard it is to walk through this world as a Black woman.  She knows how it feels to be cast aside even though she is a professional model and to perpetuate the appropriation of our bodies, speaks of how little this woman truly values her Black self.  What makes her actions particularly galling is that she acted  in defence of a racial privilege that ultimately devalues her.

What Tyra has done is not new.  There have been house slaves selling out Blackness since the time of slavery.  As its number dwindle relative to the rest of the population, Whiteness will be even more dependent than past generations on POC who are willing to demean themselves.  It looks like Tyra has found her niche.  Who needs to become the next Oprah, when she can have the title of Queen sell-out.