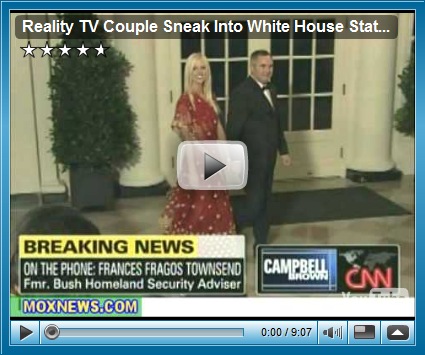 Michaele and Tareq Salahi decided to throw on their finest and crash the first state dinner of the Obama presidency.   They went through check points to assure that they were not armed, however; the fact that they were not on the guest list certainly reveals that the secret service needs to work harder to keep the first African American president safe.  After the event, the couple posted pictures of themselves with highly placed government officials on facebook.

Was it really a surprise when it was announced that the duo are seeking reality television star fame?  Apparently, she is a rumoured contender for the upcoming DC edition of Bravo's hope-squelching "Real Housewives" series. Gee, it worked so well for the balloon family, why not try and be even more outrageous.

According to Gawker the couple blended right in:

Like most good party crashers, the Salahis flitted around like they owned the place, mugging for the camera with celebs and politicians for pictures Michaele would later upload to her Facebook profile (status update: "Honored to have attended the state dinner at the White House in honor of India with President Obama and our First Lady.")—basically stopping just short of pushing Obama aside to deliver the opening toast themselves, blisteringly drunk, complimenting the Indian prime minister on his "funny hat" before trying to goad the Obamas into a quad-kiss.

Michaele and Tareq were able to slip by the secret service because they looked the part.  Imagine for a moment, a poor working class couple in jeans and a t-shirt deciding that they would like to have dinner with the president,  would the secret service assume that they deserved to be there? As much as this incident proves that the secret service needs to be more aware, it also serves as a commentary on class divisions.

The trappings of wealth often allow access to opportunities denied someone who is working or under class.  Even in our pop culture the phenomenon has been recognized.  Consider the movie The Wedding Crashers, where a pair of men are routinely able to attend weddings because they show up in what are considered to be the proper attire.  Wealth or the perception of wealth speaks loudly about power and community.  It is further troubling that they perpetuated this scam to seek wealth.  I wonder how they planned to cash in, considering that their actions constitute a potential felony?

Many Americans live with the delusion of a classless society and therefore; the barriers to access are often invisible until we must confront them.  This couple was not on the guest list and yet because they looked like they belonged they did.  The secret service may blame the chaos of three hundred invited guests all arriving at the same time, however; like all who attended the party, they did not see the outsider status of these two.  We make assumptions continually based on the appearance of ascribed or achieved status and quite often a reflection is enough to pass for the reality and this why the two were able to walk with confidence.  Anyone remember the scene in Pretty Woman, when Julia Roberts first attempts to buy clothing and is quickly ushered out of the store despite having the money to purchase items in the store?

Our clothing, jewellery and speech, are often used as measuring sticks to determine our class position.  Regardless of how kind, or generous you are, if you don’t meet the guidelines for a particular community, an outsider status is immediately applied, which is quickly followed by some form of social discipline.  When waiters and waitresses wear uniforms at events like this, it is to clearly mark their status as different from guests; it immediately tells the viewer that their role is servitude. Without the obvious trappings of the other Michaele and Tareq Salahi  were invisible, thus hiding in plain site.  Their attendance marks a form of profiling, though it will not be seen as such.  Profiling occurs when gatekeepers either act or in this instance fail to act because of a social construction surrounding the body in question.

We do not see people of class privilege as existing with any form of threat.  Most are taught to be afraid of the anonymous robber wearing a ski mask.  Crime is specifically understood to be a desperate and or lazy measure embarked upon by the lowest of the social strata.  Even when we read reports of men like Madoff, who have have committed the equivalent of economic homicide, the notion of threat fails to attach itself.  Not only were Michaele and Tareq Salahi  perceived as belonging, to enter this event the secret service had to reasonably believe that they posed no threat to the other invited guests.

Wealth is understood in almost every instance to obscures a pathology of dysfunction.  Would Obama have been less safe in a working class crowd?  Why is it that only a certain class of people are deemed worthy to share a meal with their commander in chief?  We have naturalized these distinctions but they are based on nothing more that supporting our capitalist system.  At the next state dinner the secret service will tighten their procedures and in so doing further cement the class divisions that we have constructed to determine in groups and out groups.