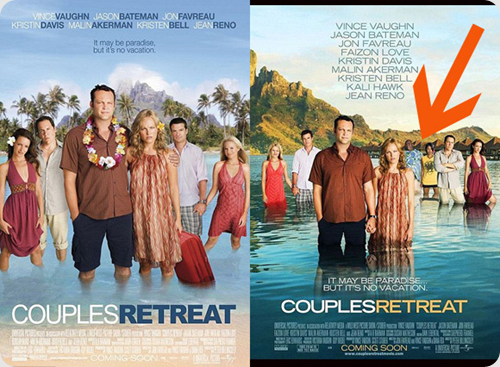 When Universal decided to market Couples Retreat in the UK, it removed the Black actors from the both the poster's photo and the list of stars typed out. Of course, Universal did not mean any offence by this action. The Mail on Sunday reports:

The studio said it regretted causing offence and has abandoned plans to use the revised poster in other countries... A Universal spokesman said the revised advert aimed 'to simplify the poster to actors who are most recognisable in international markets'.

“Simplify” is a very interesting word to describe the racism that Universal employed to market this movie.  Considering that the U.S is where it is economically because of the the free labour of African Americans, to ignore the work  of Black actors, is simply building upon the exploitation that has been commonplace in U.S. history.  Many still function under the myth that the U.S. gained economic dominance through citizens pulling themselves up by their bootstraps.  In truth, each and every single one of those citizens stood on the shoulders of African American slaves and their descendants to reach economic dominance.  This is what is known as an internal colony.

The fact that this practice still goes on, is evidence that the myth of equality is just that, a myth.  If Black people were equal, it would not be considered unpalatable to have their images on the cover of a movie poster. Their version of simplification involves the promotion of White hegemony.  How are Black actors to gain the prominence that the studio desires, if they are systematically erased?

This is not the first time people of color have been erased from advertising.  Each time a studio is called on this, an inauthentic apology is proffered.  In fact, Whiteness frequently offers these so-called apologies after engaging in obvious acts of racism.   Universal had to have known that the new posters would be deeply offensive, they simply did not care.  How many times are POC going to be offered these apologies?  Just stop engaging in racist behaviour.  How hard would that be?

We may have Will Smith, Oprah and Barack, but the bottom line is that despite a few prominent POC, Whiteness is determined to ensure that the majority labour in obscurity.  People like Smith and Oprah are elevated so that Whiteness can claim equality, but for every Smith or Oprah, there are literally millions that labour unrecognized for low wages in obscurity.   The power that the aforementioned individuals have managed to achieve, in no way negates the fact that millions of POC are daily marginalized and exploited.  Whiteness points to Oprah and Smith so that it can feel good about itself.  Each generation a select few Blacks are given the golden tap, but how does that help when a Black man with a college education is less likely to get a job, than a White man with a criminal record?

We can be outraged at this particular incident, however; unless White privilege is dismantled, things like this will continue to happen.  It is racism that is at the basis of this purposeful erasure and therefore; we must combat the diminishment of bodies of color whenever it occurs.  These companies need to be aware that apologizing after the fact is simply not good enough.