One year ago today, Barack Obama became the first Black man elected to the office of the president of the United States.  Unlike previous elections, the announcement of his victory reverberated across the globe.  There were celebrations from Kenya to Nunavut.  No matter how you feel about the man, or his politics, it cannot be denied that he has the ability to stimulate the imagination of the populace. 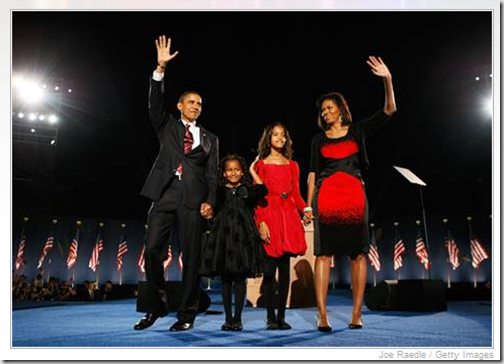 His election and the arrival of his family at the White House gate, was a dream for so many.  Blacks have always encouraged our children to work hard, telling them that they could achieve anything but until this very moment, those words were never realized.  Obama represents hope, change, and validation to so many.

From the moment he announced his candidacy he faced an uphill battle.  It was assumed that the democratic nomination was Hillary's to lose and not Barack’s to win.  Aspersions were made to his intelligence, experience, race and his wife.  Barack paid a high price to stand before the world as the duly elected leader of the US.

Exhaust the little moment. Soon it dies.
And be it gash or gold it will not come
Again in this identical guise. -  Gwendolyn Brooks

In that moment we forgot that he would be charged with dealing with two wars, an economy that was reminiscent of the great depression, a reduction of the international reputation due to things like renditions and torture and a  country that had not yet learned to love its members enough to afford all with health care.  The task before the first African American president was/is Herculean.

A year later, there are many that would say that he has not lived up to his promise of change and the yes we can mantra that became the election battle cry.  The economy is still in a slump, GITMO has yet to be closed and war rages on, with seemingly no end in sight.  The world still continues with the Obama love affair seen most brilliantly with awarding him the Nobel Peace Prize but on American soil he continues to be considered a very complex figure.

Can Obama be expected to undo the disaster that took Bush 8 years to create? Is it fair to judge his accomplishments after even less than a year in office and are we holding him to a different standard than that imposed for all of the previous White presidents?  Obama’s election raises questions about exactly where the nation stands on the divide between Black and White, as well as the divide between rich and poor.  Can any one person really champion all of the pressing issues facing the US today?

It would seem that that the populace is looking for a messiah rather than a president.  No matter his accomplishments, Obama cannot walk on water.  Even if he were to write legislative orders, they would simply be reversed upon the election of the first Republican president.  If change is going to happen, one man cannot drag the rest of country screaming and kicking into progressiveness. If it takes a village to raise a child, what do you suppose it will take to heal a divided nation?

In that moment one year ago today when it was announced that Obama would be the next president, there were tears of joy and happiness across the nation.  For that one brief second in time there was no Black, White, straight, gay, rich, or poor.  For that one brief moment, the world entire watched  as Americans united in purpose as never before in this generation.  The day has come and gone but if the spirit of that moment could simply reverberate for even the briefest of times, perhaps everyone would remember what it is to dream, and in that dream find the purpose to make the change that so many believed was possible one year ago today.