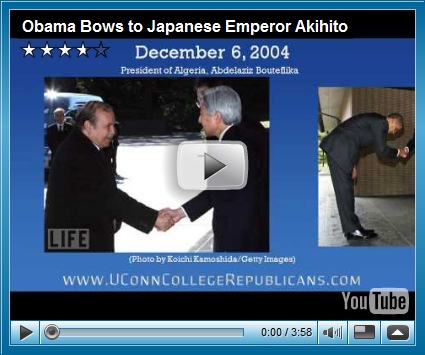 Ever since Obama deigned to bow to the Japanese Emperor Akihito conservatives have been literally tying themselves in knots.

But Mr. Obama, unlike his predecessors, likely knows no better, and many of those around him, true children of the grungy '60s, are contemptuous of custom. Cutting America down to size is what attracts them to "hope" for "change." It's no fault of the president that he has no natural instinct or blood impulse for what the America of "the 57 states" is about. He was sired by a Kenyan father, born to a mother attracted to men of the Third World and reared by grandparents in Hawaii, a paradise far from the American mainstream.

‘Cause staying with convention is working so well for America right now?  We’ll just ignore the two wars, the slumping economy and a damaged international reputation.   We won’t think about the fact that American foreign policy, created a desire in murderous men to crash two planes into the trade center and one into the pentagon.   We will just ignore the fact, that on what should have been a day of mourning, no such understanding existed in various places around the globe.

Shortly after 9/11, our then Prime Minister commented to George Bush, “Perhaps this is a lesson.  When you are on top you have to be nicer to the people on the bottom”.  While Canada has been no paradigm, in terms of avoiding neo-colonialism, his words at the moment were quite apt.  Throughout his entire presidency, George Bush snubbed the world and acted as though being president, gave him the right to openly engage in criminal behaviour and flout international law.

There was a time when the phrase the sun never sets on the British Empire was a truism.  America like all great empires before it, will eventually have its fall.  It does not comfort Americans to know that history has proven that when area asserts a measure of control over others, eventually a new one rises to take it place.  If this were not true, we would all be speaking Latin and not English today.  In the last decade, America has demonstrated many of the characteristics of an empire on the decline.  Barack Obama, with his message of hope and change, implied a change of direction, though he is still operating with a capitalist, patriarchal, racist, sexist framework.  These established norms are damaging to the promotion of a free society and therefore damaging to any agenda in which the U.S engages in.

There are many that believe, that it is too early to judge Obama and his accomplishments, given that he has been in office for less than a year.  The right has gone to great lengths to construct Obama as weak (read: effeminate) and communist in his political leanings.  Only those who prey upon a mantle of fear could even argue that Obama is a communist.  Is actions have been in defence of a capitalist nation and this can be seen by his failure to fight for socialized healthcare coverage for all.  Dismantling a pay per use system can only be in the best interest of the people.  The fear that it will cause damage to insurance companies who continue to profit in the billions, speaks of a desire to promote the interests of the ruling bourgeoisie.

Obama has made precious few gestures at this point to the working/under class.  There have been no new regulations regarding working hours or union organization.  While rich corporations received a bail out after acting in the most irresponsible manner, the average citizen was left to struggle on their own.  Tent cities now decorate the American landscape and yet Obama is somehow a communist?   His actions prove this “It's no fault of the president that he has no natural instinct or blood impulse for what the America of "the 57 states" is about,” to be an outright lie.  Obama is acting within the tradition of ever single American president that has gone before him.  His eloquence and rhetoric may hide this from the right wing ,who fear a loss of undeserved privilege, but wall street and the bankers no all to well, that he will be there tuck them in a night and wish them sweet dreams.

Bowing to a foreign leader does not make him weak.  It is an attempt on his part to curry favour with foreign nations that the US has angered over the last few decades.  This bow while showing respect to a different culture, is predicated on the American desire to maintain its globally hegemony.   The U.S has no intention of closing Okinawa, or dealing with the mass rapes that have been committed by American soldiers.  No matter how diminutive these gestures might make Obama and by default the American people appear, they are token at best.  Why make  a big deal about a bow when it is clear that the US is still in charge of the unipolar world?   Even if Obama were to kiss the feet Emperor Akihito,  it would be clear to all the world which of the two men possess real power.

Finally, the continual reference to Obama as an “other” or un-American has its basis in racism.  Of course he does not know how to behave because Black people aren’t real Americans are they?  It does not matter what his birth certificate says and did we mention that his mother loved getting the big Black dick?  No good American woman (read: White woman) is going to let herself fall into the Mandingo love trap.  Perhaps, these traditional puritans would prefer having a president who could declare Mandela dead, thus bringing shame not only upon the country but the education system.  They need not worry though, Obama may not be as dense as Bush, but he certainly is aware of who butters his daily bread.