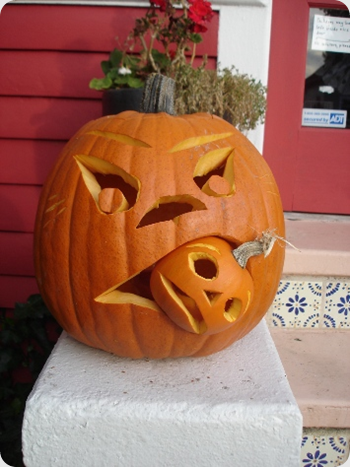 Like every dutiful parent, I braved the cold to take the boys trick or treating.  We couldn’t even get them to wait until the sun had gone done.  Even though I thought about carrying a little snifter of rum to keep me warm, I was good.  I’ll say for the record that it was damn cold and doubly so for a woman of Caribbean heritage.  And no ,I don’t want to hear any cracks about how long I’ve lived in Canada.

We went from house to house and the warmth and comfort of my couch seemed a distant memory.  I thought about the beautiful indentation I have made in it from hours of serious butt planting. Even as rubbed my hands together for warmth, I knew the cat was sprawled on the couch thinking, “Silly humans victory is mine. You’ll be frozen before dawn.”  No, really, I was not meant to freeze.

We walked until I thought their little arms could not heft another ounce of candy but ooooh the little devils had a plan.  They whipped out a huge garbage bag, dumped their candy into it and then handed it to me to carry.  Once again with arms unburdened with confectionary delights, they hit another door.  I made eye contact with other parents and we shared a look of solidarity.

Finally, it was the call of nature that brought about my reprieve, Destruction had to pee.  Never did I think I would be so happy to hear the words, “Mommy I can’t do the pee pee dance any longer, I really gotta go”. WOOOT WOOT WOOT. Warmth, couch, wine here I come and not necessarily in that order.  Even with all of the urgency in his voice, we still had to stop at all of the houses that had a light on, on our way home.

Finally, at home and nursing a glass of wine, I began to fulfill my parental obligation of checking the candy.  I handed Destruction all of the gum because the baby would just swallow it.  As I looked to ensure that none of the candy was opened, I mentally began to take notes about which pieces of sugary perfection I would confiscate when the children went to bed.  (Don’t you dare shake your head at me either) You see, I spent approximately seventy dollars on their costumes and froze my ever so delicate Black behind off for over two hours; I do believe that I deserve a little sugary compensation.

I’m not even sure we should call taxing the children’s Halloween candy a Sunday Shame. We could think about it as teaching them about sharing. Hell, Barney does it all the time and I won’t even make them sing, I love you, you love me, to guilt them into it.  Did I mention that I carried each of them for nine months and BOTH of them made a game of jumping on my bladder causing me to live in the bathroom?  Okay, so maybe I am justifying a little but don’t tell me, that I’m the only parent who decided to steal the oversized chocolate bar.  Really, I was thinking about the dental bills when I did it.

Alright, fess up you candy thieves.  What did you sneak out of your kids candy bag?  If you are to shamed to admit your guilt, you can share your own Halloween embarrassment.  Do you have a trauma inducing costume malfunction you’d like to share, or perhaps the most fucked up pumpkin on the block?  Let it all fly in the comments.