Christmas At The White House Failure 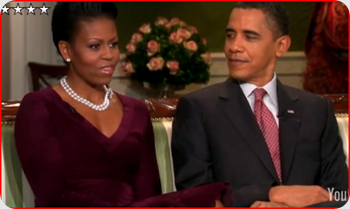 Last night I decided to watch Oprah’s Christmas at the White house.  I know that Obama has a lot to answer for but something about seeing the first African American family during the holidays and the huge cup of rum and eggnog that I was drinking put me in the mood.   Like any other Oprah interview, it was filled with softball questions but honestly, I wasn’t really expecting any better.

As the two sat together arguing about who gave the best gifts and reminiscing about Christmases past, one could not help but be taken in by the love that Michelle and Barack shared.  It was a beautiful thing to see until Michelle said something that ended my spell.  When she was talking about the talent show that the fathers put on, she referred to Barracks lip synch as lame.  Just like that, my joy was over.  It fell so easily from her lips, that clearly she did not see the problematic nature of its usage.

Lame as a negative descriptor is problematic because it demeans those of us who are differently abled.  It got me thinking that I wish that we had the kind of campaign that the GLBT community ran regarding that’s so gay.  Lame regularly falls from peoples lips and rarely do people stop to consider how offensive that language is.  Time and time again I have has ask people to stop using that word in conversation with me.  It takes a large amount of ignorance to use lame as a negative, when you are talking to someone sitting in a mobility scooter.

Being concerned about the word lame is not about PC speech, it is about the everyday othering of the differently abled.  When you take the time to wonder if using words like lame, crazy, idiot or retarded are really offensive, that is a sign of privilege.  It took me awhile and I must admit that I am still imperfect in terms of language but I am trying very hard to change.

It is important to learn without resisting.  When we start to attempt to quantify the word or take a linguistic approach, we are immediately ignoring the feelings of the marginalized. It is not for the privileged body to tell a marginalized group that they should not be offended by language.  It is such a basic thing and yet because of how pervasive disableist language is, the resistance to understanding the pain is extreme.

Just as misogyny leads to acts of violence and rape, so to does disableism lead to the marginalization of the differently abled.  Language has consequence because it frequently signifies which bodies we understand as valuable.  Resistance to altering ones speech is an expression of power because it says to the marginalized person that the powerful can co-opt ones existence without consequence. Lame or retard are not just words; you are speaking about someone’s life and this must be clearly understood.

When Michelle Obama used the word lame, she did so from the position of an able bodied person.  At this point in her life, she has no idea the simple everyday access that is denied to those of us whose bodies do not function like the majority.  She may content herself with the knowledge that she did not mean intentional cruelty, however; the end result is the same.  Whether or not you mean to hurt someone does not mean that pain was not the end result. Ignorance of the ways in which your language others another is not a defence either because it speaks of your ability to be able to ignore it because it is not your fight.  In social justice movements we have a tendency to focus on our particular issues, thereby ignoring the fact that all of these issues are interconnected.  When we ignore the fact that we all exist with a modicum of power or use our power coercively, we are only giving permission for this sort of debasement to continue.

Even though Michelle Obama is a WOC, she exists with a large amount of power and when she used the word lame last night without thinking, she expressed that power to reduce a group of people. How we use the power we all possess as individuals is extremely important because each of us has the ability to bring about change.  Institutional differences exist because we work hard to maintain them on a daily basis.