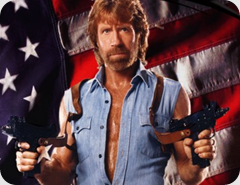 Chuck Norris has become very vocal regarding his political views.  The man should clearly limit is talents to either a weak punch or hawking his exercise equipment on late night television.  Perhaps if we chipped in and got Ron Popeil to give him a few lessons on selling things that no one wants, good ole Chuck would focus his few talents in an area that would be less harmful to women. Perhaps, together they could create a flo-bee for a new generation.

But the big question and bottom line, as Hatch asked, is: "Why should people of conscience be forced to participate in any aspect of abortion?"

Washington certainly has reached a new low by forcing American citizens who oppose abortion to pay for abortions via their taxes in this massively comprehensive way. Is it intentionally trying to spark the next Boston Tea Party? When our greatest values are thrown under the omnibus, how do they expect us to respond? (Washington's wild spending and abandonment of traditional values and our Founders' vision is what prompted me to add a 64-page expansion to the new paperback version of my New York Times best-seller Black Belt Patriotism, being released in January through Fidelis Books. See the new Web site at http://www.BlackBeltPatriotism.com.)

Clearly the man has no respect for trees.  How many innocent trees lost their lives in order for him to sell his patriarchal, misogynist swill to the world? Clearly he is no lover of mother earth because he is willing to throw her under the bus to pollute her waters by throw tea bags…but hey, didn’t they already try to do that this spring and fail?  Oh well, failing is what neo-cons do best.

Lastly, as we near the eve of another Christmas, I wonder: What would have happened if Mother Mary had been covered by Obamacare? What if that young, poor and uninsured teenage woman had been provided the federal funds (via Obamacare) and facilities (via Planned Parenthood, etc.) to avoid the ridicule, ostracizing, persecution and possible stoning because of her out-of-wedlock pregnancy? Imagine all the great souls who could have been erased from history and the influence of mankind if their parents had been as progressive as Washington's wise men and women! Will Obamacare morph into Herodcare for the unborn? 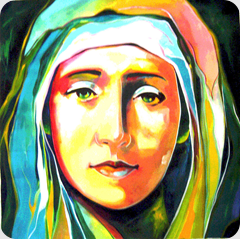 What’s a little holiday slut shaming between devout Christians right?  Perhaps, if womens bodies were not stigmatized, being an unwed mother would not be problematic?  It seems like a reasonable assumption to me.  Instead of giving birth in a manger, socialized healthcare would mean pre-natal care (shocking I know) and a safe delivery in a hospital but hey it’s only baby Jesus right?  Who needs good medical care when you are giving birth to the son of God?  Interestingly enough, I think Herod would be more inline with present day Conservative positions than Obama but hey who needs historical accuracy and logic when you have disciplining and slut shaming to do.  Of course, Mary did keep her legs crossed but being a woman in a patriarchal society means that no matter the situation, you are always guilty of something.

America doesn't need to turn the page on culture wars, such as the one on abortion. It needs to reopen the pages of its history to our Founders' elevated views of and rights for all human beings (including those in the womb), as documented in the Declaration of Independence and our Constitution. We need to revive and re-instill their value of humanity back into society, our children and our children's children.

When all else fails, just call upon the founders because they weren’t in the least bit flawed, like every other person that has walked the planet.  We can just ignore that the rights that they were fighting for benefitted privileged, rich, educated White men, who interestingly enough, aside from the educated part, are quite a bit like Norris himself.  Women and Blacks weren’t even considered people but hey, why let a little thing like that tarnish the image of the saintly founders? Perhaps, the lure of manifest destiny and the slaughter of millions of First Nations peoples kept them to busy to consider the morality of their actions.  You know how it is when you get an idea in your head, if you a goal driven person.

When you examine who is touting conservative values, how can their views be taken seriously?  From Sara Palin to Chuck Norris, not a one of them has a functioning brain cell between them.  They always hearken back to this mythical past, ignoring that in reality, for those living during that time it was a nightmare.  Before the women’s movement there were no domestic violence shelters.  How many women lived with their abusers with no possibility of escape?  Before Roe vs Wade, how many women died in back alley abortions?  If the past was perfect, we should ask who was it perfect for because I am certain that an unemployed, single Black mother has it rough today and she would have had it even worse in previous times.

When we pull the curtain away from the wizard, what we see is failed logic desperately employed to reduce the lives of women, while maintaining patriarchal power.  If Norris is so concerned about teh babies, why isn’t he actively working to fight child poverty or for better education in schools? The bottom line is that none of this concern troll knuckle twisting is really about concern for children; it is about disciplining women for daring to demand control over their reproduction.   If children really mattered, they would not be abused, undereducated, and used as a political tools by people.