It’s Elementary A Gay Sherlock Holmes Is A No No 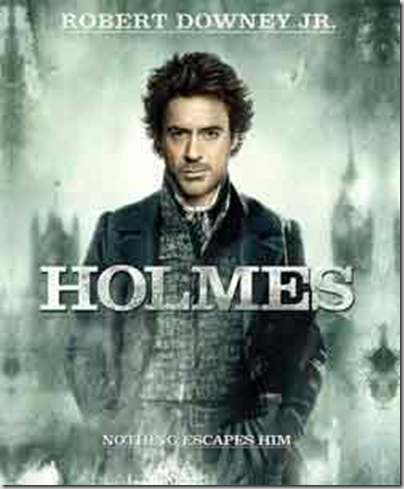 Sherlock Homes was recently released. It stars Robert Downey Jr as the famous detective and Jude Law as his sidekick, Dr Watson. In the interest of full disclosure, I will admit that though I am anxious to see this movie, I have not had a chance to do so yet.

Apparently, in promotion for the film, Downey appeared on Letterman, where he dared to question the sexuality of Holmes….lions and tiger and bears oh my! Now gasp everyone. What if the famous Sherlock Holmes “was a very butch homosexual”?  It seems the wrestling, sexual tension and sharing of the same bed does lead one to a certain shall we say speculation.

According to Pink News the copyright owner was shall we say not impressed:

She told Total Film: “I hope this is just an example of Mr Downey's black sense of humour. It would be drastic, but I would withdraw permission for more films to be made if they feel that is a theme they wish to bring out in the future.

"I am not hostile to homosexuals, but I am to anyone who is not true to the spirit of the books.”

Of course she isn’t hostile to homosexuals but heterosexual privilege must be maintained at all costs. Really, what is the world coming to, that one of the greatest literary icons could be portrayed as gay?  There must be some sort of evil gay agenda at work here.  Will no one stop to think about the children that may be subjected to this harmful image.  They need to grow in a world in which they see heterosexuality privileged at all times, lest they decide to turn gay.  But hey, everything is equal isn’t it?   Gay men and women aren’t continually erased by the popular media unless they are intent in affirming vile social constructions right?  If this is allowed to pass, we could end up with a gay superman.

When we watch a Sherlock Holmes movie, is it really that disturbing to have the character portrayed as gay?  He is not going to whip out his penis instead of a magnify glass to solve crime.   It is just a facet of his life, in the same way that it would be a part of heterosexual mans life.  Honestly, the hand wringing and whining over teh gay really needs to end.  We need to acknowledge that gay men and women are a part of every single society and as such, portrayals of them should be considered acceptable.

Former New York Post critic Michael Medved, who is a self-proclaimed conservative and famous for adding a family suitability rating to his film reviews, said: "They know that making Holmes and Watson homosexual will take away two-thirds of their box office.

"Who is going to want to see Downey Jr and Law make out? I don't think it would be appealing to women. Straight men don't want to see it."

Don’t you love the fact that a man just knows what is appealing to women? While neither of the two men are necessarily my type, a little man on man action may be refreshing for a change, in a world in which sex is presented in a one dimensional manner.   The whole eww factor is predicated on the fact that homosexuality has been created as a deviant.   There is no act which constitutes a specifically homosexual sex act and while the puritans are wagging the finger about anal sex, they need to remember that plenty of straight people do it and love it. Furthermore, there is much more to a gay man than what he chooses to get up to (yes pun intended) between the sheets.

If we continue to eliminate gay men and women from our media constructions, they can never hope to have their identity normalized and this is the real agenda behind the hand wringing that is going on.   This is about maintaining undeserved heterosexual privilege, while promoting a culture of homophobia.  You cannot claim to be accepting or even tolerant of gay people, if you get upset by their portrayal in the mainstream.